Through the course of COVID 2020, so many professions and so many jobs were either lost or had to be put aside for family. Artists and musicians, though, seemed to not be slowed during this past summer and still ongoing pandemic.

Some IHS students took the time to reflect on the effect of music, their favorite songs, the exploration of new genres, and how some of their favorite artists handled these past few months.

Different classes have different tastes, especially the 2021 senior class. Max Kovalchick, a senior, spent most of his time feeling nostalgic commenting,  “Although I love almost anything mid-’70’s to the early ’90s, including songs like “Shoot to Thrill” by AC/DC, and “Mr. Blue Sky” by the Electric Light Orchestra, my favorite band for sure is Metallica. On a totally different note, I really enjoy lots of Symphonic works, such as those created by legendary composers such as John Williams, or songs often created for various video games such as Nintendo’s Super Mario Galaxy.”

Some of Kovalchick’s favorite songs included 90’s and 2000’s classics, like “The Day that Never Comes” by Metallica and “Mama I’m Coming Home” by Ozzy Osbourne.

Some IHS students noticed that artists were more vocal outside of their music. Junior Hunter Fanella recounted listening to “Holy” by Chance the Rapper and Justin Beiber. “‘Holy’ raises awareness and address the job crisis, the economic crash, and the issue of homelessness,” stated Fanella. “Although times are tough, artists like Chance and Justin used their platform to not only satisfy their fans but inform them as well.”

Just over two years ago, the music industry and the city of Pittsburgh lost rapper, Mac Miller, to a drug overdosed. His posthumous album, Circles, released in January of 2020, peaked at the number three spot on the Billboard 200. The album seemed to gain heavy acknowledgment during quarantine, including the ears of freshman Gracie Cook who stated, “I listened to a lot of Mac Miller songs during quarantine, so when I hear any of his songs it reminds me and takes me back to the time.” Cook also said 2010 single, “Knock Knock” by Miller, stuck with her most these past few months.

Steve Budash, a sophomore, noted that he had more time these past six months to explore new music. “I explored a little more country, a little more pop, Taylor Swift mostly.” Like Budash, the entire world was shocked by Swift’s new album, Folklore, in late July. Swift’s catalog was more than enough to last through these last few months with a perfect mix of pop and country.

Some IHS students felt like these past six months were a good time to reflect on lost artists’ discography like Mac Miller, or the deep ones of artists like Taylor Swift. Others liked feeling nostalgic and thinking about peaceful times before, and some liked speaking up and trying to make a difference during this persistent plight.

Music is always an important way of vocalizing thoughts and feelings, and many students used it to hang tough during the current uncertainty. 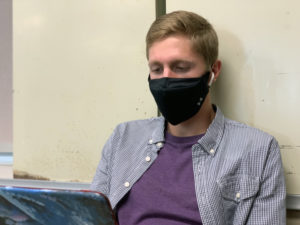 Photo Caption: “Ben Brown vibes out to his favorite music before Economics.”