By SHAGUFTA HAQUE – Despite the mental and physical challenges that this year has brought, the girls’ tennis team has played their best in every match to smash their way into the playoffs.

The circumstances have been different for girls’ tennis this season because the team lost key seniors from last year’s team, have several new member freshmen joining the lineup, and of course, the pandemic. The girls, however, made every attempt to attend team practices at the White Township courts and travel to schools for away matches. They have also managed to better their serves, improve their footwork. So far, the team has had a triumphant season.

Many newcomers have been welcomed in the tennis team this year, most of whom are ninth graders. Some of those freshmen got to participate in official games this season, as selected by coach Mr. Phil Palko. Regarding the experience of playing matches as a freshman, Tess Kuzneski commented, “It has honestly been very memorable and thrilling, I’m so glad for the opportunity to play. Everyone helps each other out, which is very useful when new to the game of tennis.”

Along with the new players enjoying the season, the upperclassmen have been equally excited to help introduce them to the sport. “I loved playing with all of the new players! It felt really good helping them out with positions, scoring, and just seeing them become better tennis players,” remarked senior Emma Cramer.

Amidst the pandemic, the girls have not lost motivation and have instead continued to take advantage of the almost daily practices. In order to refine their tennis skills, the players have constantly watched their opponents, taken advice from coach Palko, and hit some balls on their own outside of the team practices.

Junior Jenna Conrad, who has been part of the team for two years now, described what she has been doing to prepare for the games. “To prepare for matches, I give myself a little pep talk so that I don’t stress myself out about playing. The practices beforehand help me get warmed up and the regular practices help me build skills. Every now and then, I go and play tennis with some friends and it’s nice to just have fun and play with them.”

The team has played some strong teams including Knoch, Altoona, Highlands, Derry, Windber, Ellis, and Valley, most of which earned victories for Indiana. In hopes of achieving more wins, senior Maggie Medvetz expressed, “The season has been going really well in just about every aspect. Competitively, we have a really strong chance of making playoffs which is super exciting, and all of us have improved so much from the beginning of the season.”

“I have been having so much fun going to the matches with my friends as well as getting to know the girls better! I’m very proud of everyone because their hard work is really showing in our season,” Medvetz concluded. 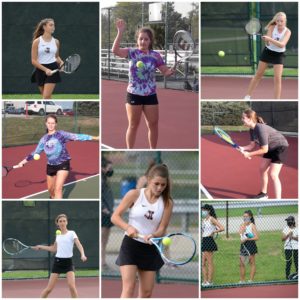 Photo caption: “Tennis team players train at practice and showcase their skills in a match.”