By MADDIE CRIBBS– Indiana Senior High School basketball season has begun. On December 7, the girl and boy teams jogged onto the court.  They were fully energized starting off the season and ready to dribble into a competitive new year.

Purchase Line faced the Indiana boys’ team, walking away with a 57-43 win. Indiana led the Annual Tip-off Tournament with a loss against Purchase Line, wrapping it in with a win the following day, December 8, with a close-call score of 54-53 against Valley.

Indiana Head Boys’ Basketball Coach Gregory Lezanic commented, “The boys’ play in one of the toughest sections in the entire WPIAL with the toughest competition coming from Mars, Franklin Regional, Shaler and Hampton.”

Senior Maddie Todd expressed, “We are excited to rise up to the challenge and compete with every team in our section.”

Following the Tip-off Tournament, both boys’ and girls’ varsity teams won one game and lost five, with three unknown scores within nine games. Upcoming, there are eleven more face-offs for the chance to make playoffs.

Coach Lezanic stated, “We need to get better and more consistent each day.  As we get into our section games in January, our goal is to stack victories and make a push to qualify for the playoffs.

Within the section games, Senior Hammad Affan stated, “Our goals are to try and make playoffs. We’re worried to face Mars because they are really good. A challenge we face this year is that we got moved up to 5A division.”

A tough season lies ahead for both teams as they fight for their way into playoffs. The coaches are leading their teams towards greatness and succession as the season started off in a rocky state. The teams look forward to facing Armstrong, Kiski Area, and Plum in the upcoming section games.

Senior Luke Thomas expressed, “As the only returning starter, it will be a new look on the floor. We will have to find a way to put the best players on the court that give us the most opportunity to win. I hope that we work together and get better. That our games are more competitive the second time we play each team in our section.”

Players have their heads held high ready to compete for the win. 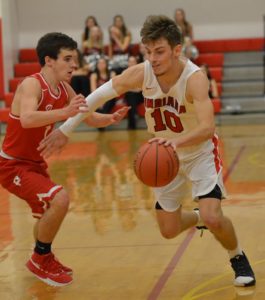 Photo Caption: “Senior Luke Thomas dribbles the ball away from his opponent.”