By ADRIANA GUTH-BOROWSKI – The IHS Quiz Bowl team is “ringing in” the new year with a playoff win. After a first place finish at the regional level, the Varsity team will continue on to the State Championship.

The Quiz Bowl team finished their regular season with four wins and one loss, the loss coming against Armstrong High School. During the Indiana County Academic League Playoffs on December 17, the IHS team took home the Regional Champion title.

“My first season was great, and I learned a lot. We worked excellently as a team,” stated sophomore Hasan Ali. “The season went very well considering we’re region champs.”  Ali leads the team with the most overall points and holds the title of most valuable player.

The IHS Varsity team consists of seniors John Harper and Rachel Okey, juniors Erin Okey and Julian Yerger, and sophomore Hasan Ali. Each member of the team plays an important role in the success of the program.

“We really bonded as a team throughout the season,” stated Harper. “I think the season went really well because we won both the JV and Varsity Championships. It felt really good to win.”

The IHS Junior Varsity team concluded the season with a record of three wins and two losses. The team won regional champions during the playoffs; however, there are no junior varsity state level competitions.

“It was chaotic to have a completely new team; however, we developed together throughout the season,” expressed Wahi-Anwar. “The competitions were intense, but it was rewarding when we got the correct answers.”

Under the guidance of Mr. Michael Bertig, the IHS Varsity Quiz Bowl team will travel to Harrisburg to compete at state level. The high school is proud of the academic success the team has had throughout the many years of competition, and will be looking forward to following the team as they advance to the state level competition. 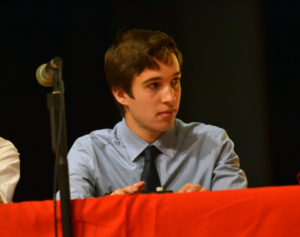