By MADDIE CRIBBS – During the month of April, Sexual Assault Awareness month is brought to attention in acknowledgment to raise public awareness in order to educate upon the crucial reality and how to prevent sexual assault. This year, the Indiana Senior High School is taking a stand.

Throughout the month of April, Sexual Assault Awareness promotional items and brochures will be passed out during each lunch period and will give the opportunity for interested students to speak with Emma Norman and Maddie Cribbs on taking a stand, and further questions they may have. Following, on April 30, donuts from Donut Connection will be sold at the Commons Cafe, during after school hours for a dollar. All the proceeds will be donated to the Joyful Heart Foundation, whose mission is to, “work to transform society’s response to sexual assault, domestic violence, and child abuse, support survivors’ healing, and end this violence forever.”

The organization stated, “We are inspired by the many ways our joyful community puts their passion into action to raise funds for and awareness about our work. We depend on supporters like you to help us achieve our mission.”

Sexual violence is often ignored and pushed to the side, but what is the hard truth?

From the hands of an adult, 1 in 9 girls and 1 in 53 boys under the age of 18 experience some form of sexual abuse or assault. Within the same age range, 82% of victims are female, and the other 18% consists of young men. Out of the entire population, females ages 16-19 are four times more likely to experience a form of sexual violence.

“This should be brought to everyone’s attention because we should be working toward bringing these numbers to zero. It is simply horrendous of what these individuals go through,” expressed senior Kristin Gonzales.

An estimated 63,000 sexual abuse cases are reported each year by Child Protective Services. Out of the 63,000 cases, 80% of perpetrators were a parent, 6% were relatives, 5% were sibling or stranger, and 4% were partners of a parent.

Above age 12, every 92 seconds, another person within the United States will experience sexual assault, averaging up to 321,500 victims within the age range stated. 60% of survivors know their attacker, excluding the 2 out of 3 sexual assaults that go unreported.

An average of, 1 in 3 women and 1 in 6 men experience sexual violence, leaving survivors to face painful trauma, whether long or short-term. Survivors often times, suffer through PTSD, depression, suicidal thoughts and dissociation, as common mental effects. The list continues into physical and emotional aftermath effects, including helplessness, sense of vulnerability, and self blame.

The important question is, “How can someone help?”

Know the signs–Physical signs may include, bleeding, difficulty walking, bruising, soreness, and/or dislocated/broken bones. Emotional signs will often include change in behavior, such as isolation or sudden outbursts.

Survivors of sexual violence are not often open to speaking out about their experience and may have trouble trusting others. Anyone who suspects or has experienced sexual violence can contact the following 24 hour hotlines:

Photo Caption: “The truth in statistics of sexual assault under the age 18.” 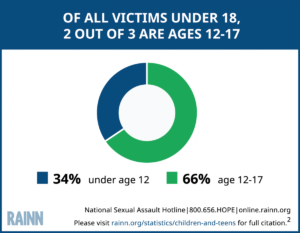