By HANNAH STEELE- On April 26 and 27, IHS drama will present This Is Your Brain on Social Media and The Internet is Distract-Oh Look a Kitten! as this year’s spring play.  The shows, a series of comedic one-act performances, features an entirely ensemble cast.

“I expect that the kids will have a lot of fun performing, but they are in need of a good audience,” stated director Leah Lyons.  Lyons has been involved with the drama department for six years at IHS.

Although the plays are lighthearted, they spread a meaningful message about society’s intense need for technology and social media.

“Being in the spring play is always such an amazing experience,” expressed third-year drama student and junior Alyssa McLaine.  “The play this year is a comedy, so it’s a lot of fun to perform and to watch. It should be an enjoyable experience for everyone in the audience.”

The Internet is Distract-Oh Look a Kitten! tells the story of a girl who is trying to finish a project about The Great Gatsby, but keeps getting distracted by the internet. This Is Your Brain on Social Media is about a principal who is concerned about the school’s technology usage and sends in an expert to educate students about the dangers of social media.  Both plays are expected to make the audience “laugh out loud.”

“You should come see the show because it’s a great representation of how a lot of people are today,” stated junior Reese McFarlane, who has been involved with the drama department for three years.  “It brings light to the issue of how much effect the internet and social media have on our lives, in a funny and light-hearted manner.”

Senior and third year drama participant Jacob Christian said, “It is really fun to be involved with the play, and I am excited to perform with my friends on opening night.”

“They [the audience] should expect to laugh a lot and, at times, laugh at themselves because they will see themselves in these characters,” asserted Lyons.

The plays will be performed on April 26 and April 27 at 7:30 in the Senior High auditorium.

Photo Caption: “Junior Danny Lee is up to his neck in trouble in the IHS Drama spring play.” 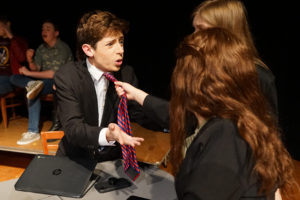 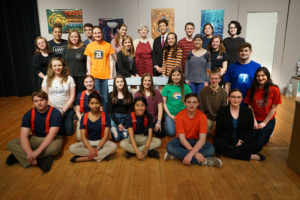 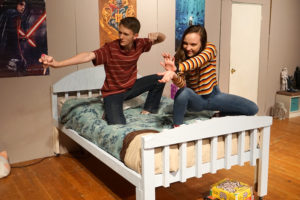 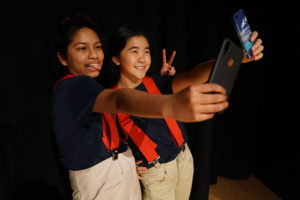