By KAYLEE BECKER-GEORGE – As IHS transitioned into the second semester, students were reminded that they are halfway through this chaotic school year. Ever since COVID-19 hit the United States one year ago, schooling has not been the same.

When the hybrid learning model was implemented, many people thought that it would only be for the first half of the year. Going forward, however, students might have to expect to spend the rest of the school year in a mask or on a screen. With that in mind, students of the school have weighed in on their personal thoughts of the hybrid model.

Hybrid learning has had its successes, of course. Junior Yahya Farag says, “The hybrid model is successful because it limits the amount of students in the high school and is a buffer from spreading COVID-19 through the school.” Some students have adjusted to the changes very well, and according to many, the model is as good as the school could get in the situation. Despite that, it also has its fair share of failures.

There have been numerous complaints about the hybrid model according to students. “It’s really inefficient in some classes, since doing things for both online and in-person students is making the normal curriculum take infinitely longer,” senior Audra Moore weighs in. “Some teachers are having a hard time adapting to things for the online students, which leads to a disconnect when students aren’t in the building.”

There have been other complaints that anyone can overhear in the halls as well. First and foremost, almost everyone dislikes the tape arrows on the floor. It impedes many students from arriving to class on time. For example, say a student coming out of 132 (Mr. Nath’s room) has Phys. Ed. next period. That person would have to walk the whole way around the lower floor and then to the gym and might not have time to get changed. After all, with how crowded the lower commons is after lunch, maybe passing other students in the halls isn’t the main issue that should be addressed.

Many students have also chosen to opt for either four days a week in school or fully synchronous. On that topic, senior Debra Flint says, “I [went full online] for my own mental health. I love school, but being in the building was stripping me of that love because I was constantly stuck in the mindset of ‘this is my final year and this is what I get?’ Going synchronous lets me still be active in school without the constant reminder.”

Fortunately, though, the students and teachers seem to have settled into a rhythm by this point, and hopefully, the administration will continue to build onto the hybrid system as the school year proceeds. 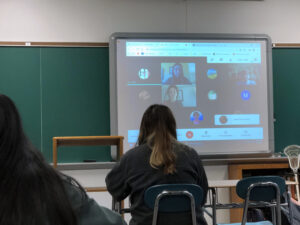 [Photo Caption: “Students attend their journalism class both online and in person.]