By KAYLEE BECKER-GEORGE – When Marvel first announced WandaVision, as well as many other mainstream TV shows, a lot of fans didn’t know what to expect.

Marvel has ventured into the TV format before, with Netflix shows such as Daredevil and Jessica Jones. However, those shows weren’t as involved with the main story lines, and many Marvel fans disregarded them.

WandaVision was announced to be a sitcom style show, following the Sokovian activist-turned-Hydra-turned-Avenger Wanda Maximoff (Elizabeth Olsen), and Vision (Paul Bettany), who had been her boyfriend before his death in Avengers: Infinity War. The trailer showed them exploring many different eras through this sitcom formatting, but teased a darker side of the story.

This proved to be no ordinary sitcom, and it drew people in. “I saw it on TikTok.” says senior Fima Sissoko. “I never really watched Marvel stuff, but I watched this and liked it so I went back and watched the movies.”

Unlike Marvel productions in the past, WandaVision is deeply character based with little focus on action. There isn’t even a hint of physical conflict until the third episode. The heart of the story is about Wanda herself, and how she deals with the grief of losing Vision on top of her twin brother and parents. Senior Ian Limely commented, “My favorite part of the show was getting to see some good character development that sets up future content.”

WandaVision definitely serves as a chance to set up the fourth phase of the Marvel Cinematic Universe (MCU). After the events of Avengers: Endgame, Marvel finds itself transitioning into a new era of heroes, and WandaVision sets up the overarching storyline they will face. Without going into too much detail, the show introduces many people and concepts that will be vital going forward.

This attention to setting up the MCU, however, is one of the reasons the show has received complaints. The ending, which will not be spoiled here, left some feeling unsatisfied. Society isn’t used to this concept of movies and TV shows mixing together in a cinematic universe, simply because it doesn’t happen often. As such, the TV show follows a different formatting then typical TV, and must be viewed in the greater context of the MCU to make much sense.

Many fans agree that Marvel has made a good choice, using TV as another type of entertainment going forward. Sophomore Chloe Williams said, “I think [Marvel found success in the TV format]. Technically this isn’t the first Marvel show, because there’s Agents of SHIELD and others, but I think this one’s successful in particular because people have been wanting to see a show with the Avengers in it.”

The story of the Avengers continues in The Falcon and the Winter Soldier, now streaming on Disney+. 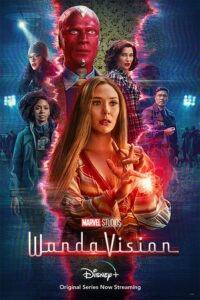