“My favorite part of the competition is to have the opportunity to exchange my math-learning experiences with my fellow contenders from different schools. The tension between us contenders throughout the competition is why I wanted to be a member of the math team in the first place,” expressed Xing.

“The most important part of the competition is being a part of the passion of all students as we all challenged ourselves greatly,” continued Xing.  “Therefore, winning the third place and the first place overall award for my school was a representation of the confirmation of my mathematics abilities. I was certainly thrilled, that all the hard work I put in proved to be deserving. I was also more than proud, knowing that I played an important role in bringing honor to our school.”

The competition had 27 schools and over 250 participants. The combined scores of ten IHS mathletes counted toward the overall highest team score.

“This math competition was more difficult than some others I have done, but I enjoyed the extra challenge,” stated senior mathlete Muhsin Wahi. “It was good that we had some strong players like George and Chloe who helped us to take home the win.”

During the scoring, the schools played a fun math game that used different operations to find numbers one through 20 only using four fours.

“I had a really good time,” said senior Josh Mbogo, another mathlete. “My favorite part was playing the game while we waited. It is interesting to see how my friends and I have grown over the years coming to these competitions.”

The talented mathletes were able to take home the prize. With the guidance of Dr. Layden, the skilled students showcased the ability of the IHS math team. 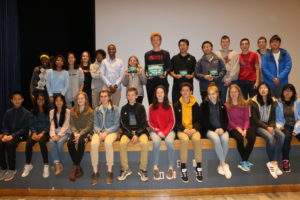