BY LOUGHLIN PAGNUCCI– The plot of Bohemian Rhapsody is the story of Freddie Mercury. It starts with him watching a band called Smile. The members of Smile were Brian May, who played keyboard, Roger Taylor, who played drums, and Tim Staffell, who played bass and was the lead singer. They are playing in a bar, and Freddie is watching. Right before Freddie meets the band, the lead singer quits. Freddie then asks if he can be the band’s new lead singer. After he demonstrates his singing, the band lets him join. The audience is also introduced to Mary Austin, who becomes Freddie´s love interest.

The band, Smile, goes around playing in pubs and other bars until their truck breaks down in the middle of nowhere. When the truck breaks down, it becomes clear that the band is getting frustrated. They are frustrated because they have been selling out their shows in pubs, but are not being recognized by any big record labels. Freddie then decides that they should record an album, so they sell the truck to get money. They then try to record the album but become upset about how it is turning out. The band then tries to do more experimental music, which gains the attention of a record label. After signing with the record label, the band goes on tours and releases many great songs.

The band then changes its name to Queen and many events unfold as the band’s reputation grows. A final crisis develops when Freddie is offered a contract to become a solo artist. The movie also talks about Freddie’s sexuality and his struggle with AIDS.

Bohemian Rhapsody was far from a great movie. It was above average at best, bad at worst. The Queen soundtrack was by far the best part, but that was kind of the point. The movie also gave lots of credit to the members of Queen, not just Freddie Mercury. Brian May, Roger Taylor, and John Deacon were often overshadowed by Mercury, but the movie helps show their creative talents.

The worst thing about Bohemian Rhapsody was the acting. Most of the actors were very flat and boring with their acting. The actors do come alive during the musical performances, however, especially Freddie who captivates the audience with his stage presence.

The movie was also 2 hours and 15 minutes long, which could have been cut down to 1 hour and 45 minutes very easily. Many scenes were filler that did nothing to build the story. The plot was also very confusing. Many of the band’s managers and agents all wore suits, so it was hard to tell them apart. The agents also did not get much development as characters, so if one of them got fired, it was hard for the audience to know if it was the fault of the agent or if it was a wrongful firing.

Overall, this movie was average. It did have good parts, but there were many bad parts that kept it from being a great movie.  Three out of Five stars. 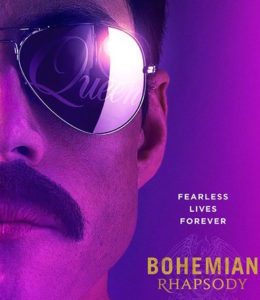