By MIKAYLA CRAMER- IHS is striking into it’s first season of bowling. With three high school members, the bowling team is off to a rolling start. For the first year, the team will be competing against each other, with training sessions in between games.

“We will compete in teams like a typical bowling league does, but we will also have individual awards for categories such as best average, best series, best game, etc,” said Mr. Brian Henninger, the coach of the team

“I have bowled since I was eight in the league at Mohawk,” said sophomore, Benjamin Coleman. “My favorite memory is when our team made it to the roll-offs.” The roll-offs in bowling are the championships. Benjamin’s highest score through the league so far is 213.

“I joined because bowling has been in my family for a long time and I think it’s a really cool sport, and I don’t think it matters what your score is as long as you’re having fun,” stated freshman, Alyssa Dalesandro. She enjoys traveling and meeting new people at the different bowling centers. Alyssa’s best score is 198.

Bowling takes concentration, strategizing, hand-eye coordination, and physical strength. Whether it be holding the bowling ball a certain way, using the spots on the alley to line up the ball and pins, or just concentrating on the pins. There are two tries with each frame to get ten pins down. If all the pins are knocked down one roll.

If the bowling team continues to have interest from the IHS students, then they will look into becoming an official WPIAL team and compete against other schools.

Photo Caption: “Benjamin Coleman sets up for a strike.” 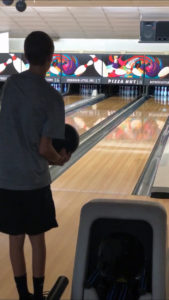