By KAYLEE BECKER-GEORGE – Marching Band was one of the first activities to get the “go ahead” this school year, and had to set a precedent for the other sports to come.

Band camp started on August 10, and returning veterans found the band camp they knew had been changed drastically. Students wore masks at all times, with the only exceptions being during lunch and when playing. Red pieces of cloth were used as “instrument masks” to hinder the spread of the disease. Social distancing was maintained at all times.

Jenna McLaine, a sophomore and three-year Marching Band veteran said, “COVID-19 makes Marching Band more difficult, but we’ve found ways to work through it. We have to learn drills with masks on and have had to change drills to make sure we are far enough apart since we can’t wear masks while playing instruments.”

The marching band will not be traveling to away games to play this season. Instead, they will play at four home games. The band will not be wearing their usual uniforms, and have been instructed to wear their band shirts and custom masks. While usually spending most of their time in the band section of the bleachers, the band will spend this season behind the goalpost nearest to where they used to sit.

The band played their show Journey for the first time on Friday, September 25 at the home game. The show features hit songs from the titular band Journey, such as the upbeat “Any Way You Want It,” the power ballad “Open Arms,” and hard-hitting “Separate Ways (Worlds Apart).” The band will also be adding on the band’s world-renowned “Don’t Stop Believing” later in the season.

Seniors facing their last year have taken the year in stride, but not without feeling a bit disheartened. Section leader Debra Flint, a five-year member of the marching band, stated “Having this as my last marching band year is disappointing, but I feel that the school is doing the best they can under the circumstances. I knew coming into this year that it wasn’t going to be a normal senior year, but it was still a shock.”

Despite the changes, the band members have made the best of the situation. Senior Silas Schiera, one of the band’s drum majors noted, “I’m really happy to do what I enjoy doing with my friends. I like music a lot, and this is a way for me to do music in a form that is fun and athletic at the same time.” On a similar note, junior Izabella Musser stated, “It’s fun being able to spend time with friends and play an awesome show.” 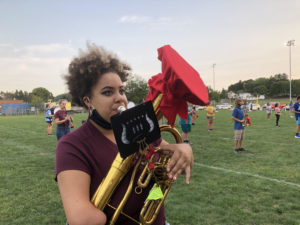