By MEGHAN RUMMEL–  The “drink it or dump it” policy, the no headphones rule, and the no hats rule are all causing a commotion for many in our school.

The headphones rule is in place because if students have their headphones in when they’re walking in the halls, they could miss an important announcement because whatever they are listening to could be too loud. The no hats rule was set so that people don’t wear hats into the building because it is seen as disrespectful, and someone could be hiding unwanted things inside of the hat. The drink it or dump it policy is used to reduce the number of drinks spilled in the hallways.

Aiden Cessna, a sophomore, expressed that he doesn’t agree with the drink it or dump it policy because “school water is terrible.” However, English teacher Dr. Bond says, “A drink it or dump it policy helps protect the students. I know many schools have the same policy. It is hard to know what is in the cup coming into school from home. Is it really your morning tea or something else?”

I personally do not agree with the drink it or dump it policy, the Common Cafe sells coffee which comes in an open drinking container and we are allowed to have that in the school, so why are we not allowed to bring our own drinks into school?

Freshman Kahriya Whittington commented, “I think that people shouldn’t be allowed to bring drinks into the building because they could have liquor in it, but I feel like they shouldn’t make people dump their drink because they spent their own money on it.”

Whittington also stated, “People should be allowed to listen to their music instead of being loud and annoying in the hallways.” Every day students walk in the halls with headphones in their ears, and almost everyone you see with their headphones in are just listening to music and not bothering anyone. Cessna also agrees with this, saying, “Music can help you focus.”

Bond, on the other hand, thinks that “Wearing headphones while moving is a safety issue. Your brain can’t process all the information it’s receiving.”

Whittington revealed her mixed thoughts on the no hat rule. “They [students] should be allowed to wear du-rags, bandanas, and baseball caps because I don’t think it makes a difference if kids wear hats into the school or not because if they are trying to bring something into the building they’re still going to get it in some other way.”

I do agree however that students should not be allowed to wear hats in the school because it is disrespectful and would bother many students and teachers. Shockingly though, these rules don’t really affect a good number of students because many are not even aware there are such policies. 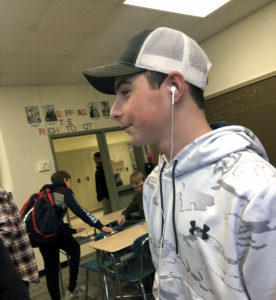 Photo Caption: “Freshman Connor Geesey demonstrated what NOT to do according to the recently enforced IHS rules against headphones and hats.” 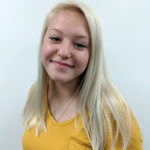