Parks starred as Steve Jobs in The (R)evolution of Steve Jobs, which was took place at the Santa Fe Opera. This show became the most popular new opera in Santa Fe Opera history.  During the 61st annual Grammy Awards, Parks along with the rest of the cast, took home a Grammy for the best opera recording.

Before graduating in 2002, Parks took part in many musical opportunities at IHS. The music department allowed for a strong foundation before he entered into his singing career. “My time at IHS prepared me in many ways. I would say the most important thing was just being involved in the vast music/drama program at IHS. I was in every musical, play, and choir ensemble. I took drama classes. I helped build sets. I learned everything I could possibly learn. I was lucky to have had some great teachers,” stated Parks.

“It was really inspiring to hear that he won a Grammy,” stated junior Grace Wadding. “It makes me really proud of our music department.”

Often times many young musicians become discouraged because of their background. Parks shows students how it is possible to accomplish great things, even if students comes from a small town in Pennsylvania. “The only thing that will prepare you for your next step in the arts is to come out of high school still feeling like you have something to learn. Never stop being a sponge,” expressed Grammy winner, Edward Parks. “Study, work, focus on the outcome. Forget all of your expectations. Expectations are dangerous to self-growth. If there is anything I have learned from life (not just life in the arts) is that things are not going to turn out the way you expect. Keep your eyes on the outcome and not your expectations.”

“It really goes to show that even someone from a small town has the ability to make it big. For anyone in the music department who has the desire to go professional or to just move on to bigger things, I think that Ed Parks’ success is really encouraging,” expressed junior Amelia Kuzneski. “His achievements make me want to work harder as a musician, because even though the music industry is hard to get into, it is achievable.”

Parks is able to encourage many students at IHS because of his success. He also introduced the opera genre to a new generation. Often times the opera style can be looked over, however, he shows how valuable the genre can be. “I never really listened to opera much before, but he opened my eyes to the genre because he was from IHS,” commented sophomore Alexis Single. “It makes me realize how many types of music are out there that I should be more open too.”

Winning a Grammy is a very special accomplishment, and it is inspiring to the students who are following a similar path to Parks. His legacy will forever live on in the halls of IHS. 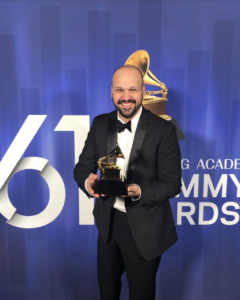