By ADRIANA GUTH-BOROWSKI – Every year the Indiana Area School District comes together to raise money for the Hopeful Hearts foundation. This year the school district was able to raise over $14,000 for the charity.

The combined team of Benjamin Franklin and Eisenhower Elementary school won the competition. Raising over $5,000, the team also won the most money raised.

Every year a team is awarded a spirit stick for showing the most school spirit throughout the night. This year, Horace Mann and East Pike Elementary showed how enthusiastic their team spirit is and was awarded the spirit stick. “It was cool to see how into it the elementary students got into the competition,” stated senior Muhsin Wahi-Anwar. “It was fun to watch teacher that I used to have in elementary school compete. Also, it was interesting to see teachers unleash hidden athleticism.”

The event was run by the IHS Key Club. Student volunteers ran each of the events as well as concessions and ticket sales. “It meant more to volunteer knowing that the proceeds were going to a good cause. It was really cool to watch how excited all the kids were,” stated sophomore Key Club member, Sydney Brice.

Battle of the Faculties provided a fun way for the district to come together to support a good cause. Over the years, the schools have raised over $100,000 for the Hopeful Hearts charity. Through the charity the IASD is able to support grieving families who lost loved ones due to heart problems. 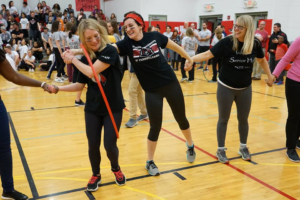 Adriana is an Associate Editor and  sophomore that has been on the High Arrow staff for two years. Her goal is to bring accurate news and other stories to the readers of the High Arrow.