By MIKAYLA CRAMER – On the afternoon of Thursday, October 4, 2018, Student Government Association (SGA) held the 2018 Homecoming Pep Rally. This event always happens before the Indiana High School homecoming football game to get the students pumped for the game. The whole school gathered to watch their fellow peers compete in games while anxiously awaiting to hear who would win Homecoming King.

Back flips and cheers greeted the student body as the Indiana High School Cheerleaders started off the Pep Rally. Students joined in the school spirit by wearing the school colors of red and black.

Freshman Tullia Dietz said, “My favorite part was the hungry hippos because I enjoyed the enthusiasm of the players and getting to see all the other grades together enjoying the rally.”

Junior SGA member Hanna Contrucci stated, “This year there were only 25 minutes to do all the games and with lots of planning we were able to get it done before the announcement of King’s Court.”

Following the games, the King’s Court was accompanied by the Queen’s Court to the center of the gym. Each king candidate was introduced to the student body. The King’s Court included Hammad Affan, Brandon Boyer, Anthony Beveino, Joey Bujdos, and Chase Cunningham. The crowd stomped their feet in anticipation of the announcement of this years Homecoming King. Payton Rayko, president of the SGA had announced Anthony Beveino as the 2018 – 2019 Homecoming King.

“The minute before they announced my name, I was simply appreciative of being on the court and thought that it didn’t matter who won, as we all deserved the title equally,” said Homecoming King Anthony Beveino. 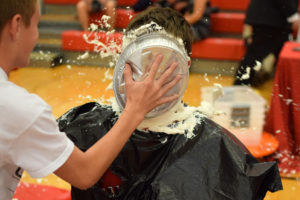