Skip to content
Wed. Oct 20th, 2021
Isaac Myers and Anna Margita crowned 2021-22 Homecoming King and Queen
Have something you would like us to write about? Send a letter to the editor today! Our email is ihshigharrow@iasd.cc

By KAYLEE BECKER-GEORGE – Senior Teagan Merriman joined the High Arrow at the beginning of her senior year and has since been a valued member and friend of the staff.

During her four years at IHS, Teagan has accomplished many things. She made varsity in both volleyball and lacrosse, joined the National Honors Society, and was even named Girl of the Month in May.

Teagan’s favorite memory of IHS was THON her sophomore year. She will miss her teachers such as M. Dykun and Mr. Nath the most but says that she will not miss high school’s social dynamics at all.

Mr. Nath playing his guitar in class stands out as one of her favorite memories of the High Arrow, although she has no complaints about never having to try and get stuff to load in Google Drive ever again.

Teagan has been a joy to have on the staff. Senior Ethan Black says, “Teagan and I have been close friends since about eighth grade, so it was really fun to try something new with someone you go through high school with intensively. In our first and final year as writers, Teagan and I would constantly read and edit each other’s articles, crack jokes, and talk about the hottest drama within our lives. I’d love to say I took this class for the benefit of learning the art of journalism, but I really chose it to be with a friend like Teagan.”

Teagan herself has words of advice for incoming staff members saying, “Take the opportunity to enjoy writing stuff that you care about.”

Teagan plans to go to the University of Pittsburgh in the Fall to work on a major in Psychology. 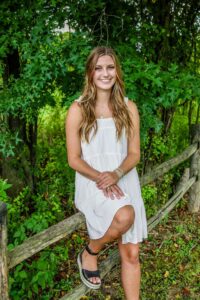