By ETHAN BLACK – From lacrosse team captain to a High Arrow staff member, Sydney Brice has lived a decorated career at IHS. Though, for Sydney, her favorite memory of IHS was co-chairing the annual IHS Mini-THON.

“There is nothing more special,” noted Brice, “than putting together an event with some of your closest friends to help raise money for kids with pediatric cancer. It was also really amazing to watch all of what we planned come to life because there were many times we would doubt what we were doing, but overall we knew it was possible.”

The yearly fundraising event where students from Leadership Seminar plan and run a night filled with dancing, games, food, and raising tens of thousands of dollars for children diagnosed with pediatric cancer. This year, Sydney and the rest of Leadership raised $27,565.07 and live-streamed the event over Youtube. The event had interactive events, similar to those of a normal Mini-THON, for senior high students to still feel like they were a part of something that night.

Sydney doesn’t have many memories that will ever make her feel indifferent about IHS, only one of them being the struggle of obtaining quotes from people for her newspaper articles. Journalism wasn’t just finding quotes about recent sports seasons for Sydney but also learning about the history of the class.

“My favorite memory of the High Arrow,” reflected Brice,  “was getting to look at the old school newspapers one day. It was very shocking to see what they were allowed to write about back in the day.”

Senior staff member Teagan Merriman enjoyed her time in the High Arrow with Sydney just as much as anyone on the staff.

“Sydney always made me laugh and she has really good writing skills,” stated Merriman. “I’m glad she was on the staff with me this year.”

Sydney also said she’ll miss the school community the most after leaving IHS on June 4.

“I truly believe that we have such a strong school community,” stated Brice. “There is nothing else like it. Every single one of my teachers has made such a strong impact on my life and they have truly shown me what it looks like to love what you do.”

The impact of teachers upon Sydney has her swaying her toward a career in teaching, but she is still up in the air about a major.

“I am planning on attending the University of Kentucky,” claimed Brice. “I am undecided about a major at the moment, though.”

For myself, my time with Miss. Brice on the High Arrow staff was just that and more. Sydney and I would always find something to laugh about, even if it was something blasphemous going on in the school or something to bicker about with Mr. Nath. Seeing her grow alongside me since first grade, as a talented and relentless leader through Leadership, and an exquisite journalist through the High Arrow makes me confident in Sydney’s future. 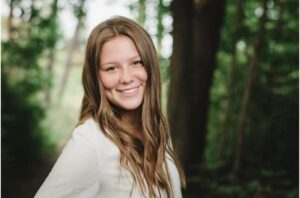