By HANNAH STEELE- On May 15, IHS Girls Softball played their first playoff game against West Mifflin, resulting in a 7-5 win for Indiana and a progression to the quarterfinals of playoffs.  They competed against Elizabeth Forward on May 20, unable to secure a place in playoff finals with a tough loss of 1-5. Despite this loss, this was Indiana’s fourth consecutive year making it to playoffs.

Indiana had a 12-9 record overall and went 5-5 in conference play for the season.

“We [the coaches] tell the girls if they work hard at every practice and during games, the results will pay off,” expressed assistant coach Holly Myers.  “This team has set a standard to make playoffs every year, and they have lived up to that expectation.”

Indiana, seeded 10th in their division, came back from a 0-5 score in the bottom of the 4th during the first round of playoffs, becoming victorious against West Mifflin, who was seeded ahead of them in their division.

Sophomore Sara Zimmerman advanced to third by junior Alexis Bonatch on a line drive during the quarterfinals of playoffs, resulting in senior Haleigh Zimmerman hitting the only run for Indiana in the game against Elizabeth Forward.  After an injury that left her unable to play for two weeks, junior Cleo McMahan proved helpful during the game by making crucial plays at shortstop and hitting a double.

Senior Haleigh Zimmerman, a fourth-year Varsity player, leads the team with eight home runs and 29 RBIs, which lead to her in becoming a crucial member of the team.  After overcoming a season-ending ACL injury during her junior year, Zimmerman came back strong for her senior season. “Everybody stepped up this season and did what was asked of them, resulting in a great season,” asserted Zimmerman.  “I lead the team by using positive energy and encouragement to everyone on the field.”

“We [the team] worked hard throughout sections in order to make it to playoffs,” stated junior Alexis Bonatch, a third-year Varsity player with a .515 batting average during conference play. “Everything that we worked for in sections led us to winning the first round of playoffs.”

Senior Alley Bush, a fourth-year varsity player, served as the starting catcher and proved very helpful to the team’s success.  “Once playoffs started, the seniors knew our final game was approaching, so we went out on the field and made the most of it,” expressed Bush.

“The future of Indiana softball is looking bright and the coaches are looking forward to it,” concluded coach Myers. 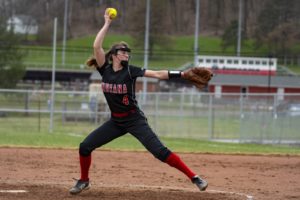