By SHAGUFTA HAQUE – The IHS boys tennis team played their first playoff games at the Quaker Valley courts on May 6, 2021.

The game against Knoch was a turning point for the boys as their 5-0 win led to a three-way tie for fourth place with Hampton and Knoch.

“Normally the top four teams qualify for the post-season, but with the tie, six teams from our section made it in.” head coach Phil Palko commented, “The Knoch match was the only time I ever recall all five individual matches being decided in three sets.”

Indiana went against Carlynton and earned a 4-1 victory, moving on to play Quaker Valley. The second game resulted in a 5-0 loss for the IHS boys.

Quaker Valley seemed to be a challenging competitor as they, “will likely be the WPIAL champions” according to Shearer.

Upon losing the season last year due to the COVID-19 outbreak, most of the team wasn’t able to gain much experience playing as a team. Despite that, the players made sure to attend daily practices to learn newer strategies.

“Much like the girls, the boys snuck into the team playoffs with a dramatic win.” reflected Palko, “There have been other challenges mainly due to scheduling conflicts with other sports and events, but the core group has managed to keep improving and the trip to playoffs is a nice reward.”

The tennis season ended with the second playoff game leaving the team to do even better next season.

Ray shared, “This season was really fun, and winning my first playoff match was exciting and a great way to end the season!”

Congratulations to the IHS boys tennis team for making the playoffs, and especially the seniors the lineup consisted of. With the guidance of coaches Palko and Nick Buckshaw, it can be hoped that the team will continue to get better every year. 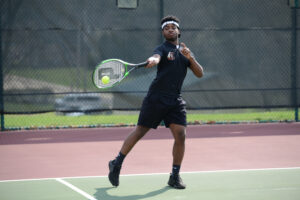