By HANNAH STEELE- According to save.org, suicide is the second leading cause of death in the world for those aged 15-24 years old. In an effort to combat this startling statistic, the Leadership class made a series of efforts to raise awareness for Project Semicolon.

Project Semicolon is a non-profit organization that advocates for mental health awareness and suicide prevention.  In a video featured on the morning announcements, Leadership students interviewed members of IHS with questions regarding the mental health of the school.  Most students in the video revealed that they know at least one person who suffers from a mental health disorder.

“Our goal was to show that people suffering are not alone,” stated Ms. Duffy, who oversees the Leadership class.  “The video on the announcements was powerful because of the honesty and empathy that was shown by peers. I think that if one person feels less alone and more empowered to reach out for help, we have reached our goal.”

Leadership also created posters to be hung around the school with resources such as the suicide hotline.  On September 19, all students were encouraged to wear yellow, teal, and purple to bring awareness to the project.

Senior and Leadership member Harley Kessler was heavily involved in the creation of the videos seen by the school.  “I think it’s important to be honest and blunt about these things with the community because it is all very real, and there are people all over our school who are going through the struggles that we talked about in the video.”

Senior Lexi Smathers, who was involved in the creation of the videos expressed, “With the videos and posters we’ve been making, my goal is for people in our school community to know that it’s okay not to be okay.  Hopefully, students will see that it is okay to reach out for help when it is needed.”

“Suicide awareness and prevention is necessary and important because some people don’t know they’re not alone in their struggles,” expressed Leadership senior member Jack Finegan, who edited the video.  “Leadership is trying to bring light to this issue because it matters so much to our school as a whole.”

Students in Leadership learn practical and theoretical skills of being a leader while also organizing important events such as THON and the IHS Wall of Fame. 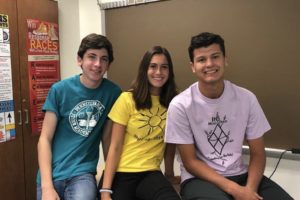