By MADELINE SHIRLEY– This year the IHS Homecoming dance was held on October 9th, 2021, but the plans were changed several times.

The gym was set up with a red carpet as a path from the doors of the gym, and there were tables outside for the food being sold. Around 500 students attended the Homecoming dance.

With all the changes that were made you may be wondering if homecoming was successful.

Freshman Gabby Sharp feels that it was. “I do feel like it was successful because so many people came and had a good time”.

During the pep rally, Senior Isaac Myers was crowned Homecoming King and was definitely surprised. “I was very surprised and thankful just that my peers look at me as a nice person.”

The following day at the football game Senior Anna Margita was crowned Homecoming Queen and she feels very honored. “I think it’s awesome, I feel honored to be representing the 2021-2022 senior class and highschool as homecoming queen.”

When they were announcing the homecoming queen the student section was full of color from cups of chalk that the students could buy.

Here are some words from the Homecoming King and Queen.

From Isaac Myers, “Well I would like to thank everyone that voted for me to get on court and to make me King and all the other members deserve to be where they were and they all bring something special to the school environment.”

From Anna Margita. “Thank you to everyone who has voted for me to become homecoming queen, I appreciate it and feel honored. I am so happy to have been a part of everyone who was on court. You all inspired and impacted me all in a different way.”

Overall the 2021 Homecoming seems to have been a success! 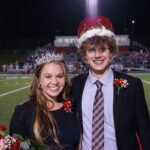