By MADISON PALMER– If you are wondering when the arrows in the hallways, distanced desks, required mask wearing, and lunch in the gym are going to be a thing of the past, you are certainly not alone.  Vaccine research continues and government officials release new information every day.

Based on what health officials are saying, some insight can be gathered for what is to come.  A recent article released by The Associated Press titled, ¨Companies Testing Vaccines Pledge Safety, High Standards,¨ explains that according to health officials we can expect to see a vaccine available to the public no earlier than November.

Should this intensive process be rushed, the results could create even more problems.  Although it has already been over eight months since the first confirmed case in America, most vaccines take a year or more to be released.  It is no secret that society is ready for a definitive tool to combat the many symptoms associated with this virus.

Certainly, health is of grave concern.  Though along with this comes a more challenging education model for many.  To be able to focus on schooling in the midst of so much change and uncertainty is no small feat – not to mention the many adaptations schooling has undergone during these times – can make proper learning inaccessible for some, as they find themselves without the proper tools to accommodate.

A few interviews were conducted in order to gain insight from students here at IHS.  Freshman Lauren Wilson was asked whether or not a vaccine should be released within the next few months, and if she would feel comfortable or inclined to get it.  Her response was, “Yes, however, I don’t know if I’d be comfortable receiving it because we don’t know the long-term effects.”

Junior Rachel Wilson contributed, “Giving the vaccine to people in the hospital would make more sense (so that) if someone gets sick they could just get it.”  She then mentions how perhaps, “this could help school return to normal more quickly.”

It seems that our school body is far from ignorant to the many realities being considered by healthcare professionals, despite the fact that waiting on any improvement is less than desirable.

“I personally would like to go back to a sort of normal as soon as possible, but vaccines take a long time to be developed and that could end badly,” concluded senior Carmella Barbra.

Several leading companies working on a vaccine are no different.  Each has promised that no corners will be cut in efforts to speed up the process.  It is important to rely on and support one’s community during these times.  In following the guidelines, our school can also play a part in working towards lifting them and protecting our community.  All in all, it will take time and a lot of patience. 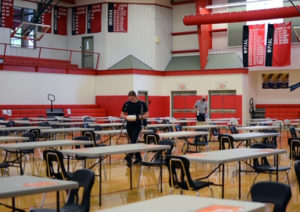 Photo Caption: “Senior Shay Smith heads to his next period after finishing his lunch in the gymnasium.  Due to the ongoing pandemic, this is the only location where eating is permitted.” 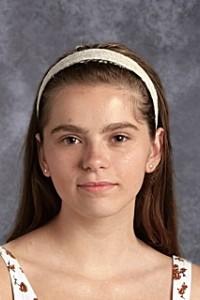 Madison is a senior who, despite having enjoyed writing for many years, has now joined the High Arrow as a first-year reporter.  She enjoys dancing and is in her fifth year of French in our district’s language program.  Her goal is to engage in the school community and our publication , something she finds to be a wonderful experience.