By MADDIE CRIBBS – The time has arrived: hockey is here. The Indiana High School hockey season opener took place on October 4 at the S&T Bank Arena and then team hit the ice at 7:30 p.m.

The first game of the season was between Indiana and Westmont Hilltop, and ended in a score of 4-2, Westmont Hilltop. The loss by the Indians, however, did not cause the players to lose determination.

Senior Nicholas Wood stated, “For myself and my teammates, we all hope to come out next game with intensity and be able to keep that intensity throughout the whole game.”

Senior Luke Wachob made the first goal of the season with an assist from Orlando Clark: “It felt really good getting it out of the way in the first game–definitely a confidence booster for the rest of the year. It’s always fun being able to celebrate a goal in front of the rowdy rooters.”

Skating fast upon the puck, Sophomore Danny Williams came in with the second goal with an assist from Owen Lydick—tying the score 2-2. Williams said, “It felt great to get the first one under my belt. At that point we knew we had a chance at fighting back. It felt good too with it being in front of the student section.”

As Westmont Hilltop broke the tie with two more goals, the Indians’ “Rowdy Rooters” continuously cheered on the team. Senior Katie Conrad, a rowdy rooter for the hockey team for four years commented, “It’s mainly just about supporting my friends and getting to watch them do something they love. It’s always a good time to be able to support my school through my friends. Win or lose, it’s still a win-win, I think.”

The first game of the season was an eye opener to the players but not a disappointment. Senior Eddy Williams commented, “We played a really good team, and it was our first game of the year, so it wasn’t a bad performance. I hope that we can learn from our loss and get to where we need to be to become a good team in this league.”

Regardless of starting the season with a loss, it’s only the beginning for the team.

Senior Gunner Sharp stated, “Coming off of our loss, our hope is to re-evaluate our game plan and adjust it to where it needs to be to put together a successful team. This season, we hope to make it deep into playoffs and make a run for the championship.”

Photo Caption: “IHS rowdy rooters came out to support the team in their season opener ” 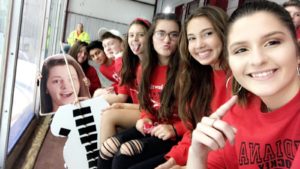