By MADDIE CRIBBS- On October 26, the Indiana Indians battled tough against Greensburg-Salem for the chance to make the playoffs. The Indians walked away with a heartbreaking loss of 17-0.

Before the game kicked off, the seniors were recognized as they walked across the field one last time.

The community had honored the beloved senior football players, cheerleaders, and marching band members, along with the football videographer and manager, boy’s and girl’s golfers, girl’s tennis players, and boy’s and girl’s cross country runners.

One foot in front of the other, all fifteen senior football players walked across the field they grew to know one last time. Each individual was recognized one by one for their great efforts, including chosen MVP player, Jeremy Thomas, and #1 leading quarterback with the most passes in the history of Indiana High School, Luke Thomas.

“Walking across the field, I was excited, yet sad because of the fact that this is really happening, that I really am moving forward,” expressed Senior Jeremy Thomas.  “I went into the season not really feeling comfortable because I’ve missed a year of school and it pulled me away from everybody, but after a while I started to feel accepted as a part of the brotherhood, and I couldn’t ask for any other family to play with.”

Earlier in the season, Thomas was awarded as the recipient of the Scott Zellem MVP Award. Thomas stated, “Receiving the MVP award was the best thing that happened in my life. If anybody knows my background, they would have never seen it coming or expected it nor would I myself.”

The long fight the Indians put up was hard and nerve-wracking. A close call to catching up, Greensburg-Salem came in with a tough tackle. In anticipation, the Indians stood anxiously along the sidelines with hope and faith in their brothers on the field.

“When I was a freshman and became the starting QB, the seniors showed me what brotherhood was. They stayed committed to the season no matter what. Ever since that day, I knew I had to stay committed and lead my team through the next three seasons, no matter what the W’s and L’s were. In the end, it’s about the love of the game and a band of brothers,” stated Senior Luke Thomas.

Up above the band of brothers stood the cheering Rowdy Rooters. Proud and filled with love, win or lose, rain or shine, the student section always makes sure to come out and support the boys that represent the bond in our school.

With hard work and dedication, the football players this season put in their all and gave everything to better the team of brotherhood and bring pride to the community.

Senior Nicholas Wood stated, “Even though we ended with a loss, I am really proud of what direction we pointed the program in, and how we performed this season. I believe we did better than what everyone expected. Coming out with a new coach and offense, we did what we could.”

After the game, the football players gathered in the center of the field and huddled with tears running down their cheeks. Heartbreak was felt, along with love and brotherhood and the end of an era that the Senior players will never forget. Students and parents rolled in through the field to celebrate and grieve with the team they adore.

In the end, it’s not about whether the team wins or loses, it’s about the special bond of brotherhood the team forms and the love and support the community brings to the team. It’s all about the hard work and dedication the players put forward and their faith to follow their dreams.

“You know this is it. You know it’s your chance to leave it all on the field. Your time to lead. Like our motto in the spring: ‘My team, Our time’,” disclosed Senior Luke Thomas. 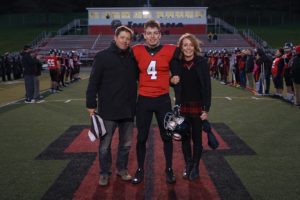