By KAYLEE BECKER-GEORGE – When the lockdown hit in March, many businesses were hit hard, and movie theaters were no different. Not only is it dangerous to have too many people in such a confined space at once, most new movies had been postponed anyways.

Some notable delayed movies included Wonder Woman 1984, Free Guy, and The Batman. Senior Andre Rubinstein says, “There were many movies that were sadly postponed due to the virus, like Black Widow and Mulan. Knowing that those movies were coming out and being as excited as I was, life felt boring when they were postponed, and it feels like I’m at a standpoint. I’ve been watching the same movies over and over and it’s kind of sad. I hope the virus will go away and I’ll be able to have fun at the movies again.”

Junior Izabella Musser says, “I absolutely love [that they’re playing old movies]. They have been playing Die Hard recently and I couldn’t pass it up. Just being able to go and watch movies is such a big thing, especially in a small town like ours. I’m glad they’re at least up and running for the time being.”

However, recently Governor Wolfe put out new COVID-19 restrictions, and the mall theater is once again closed. This time of wonder leads people to wonder: is this the end of movie theaters?

Disney decided to release their movie Mulan on Disney + for a heightened fee. Many streaming services have hopped onto the “Netflix Originals” trend, coming out with new TV shows and movies that never hit theaters. Amazon Prime has movies, and if someone is willing to sacrifice the ability to see the movie immediately, they can rent it cheaper.

Senior Audra Moore says, “I really don’t think a lot of theaters are gonna make it out of this. The benefit of streaming from home and not having to pay for tickets and snacks and stuff is going to outweigh the experience of going to see a premiere.”

There is a chance that movie theaters will beat the odds. With many companies holding out on releases rather than using streaming sites, there will be a large increase in revenue once it becomes safe to go outside again. Movie theaters just have to hold out until then. 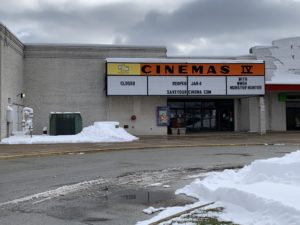 Indiana’s local movie theater is one of many businesses to close again amongst new COVID-19 restrictions.