MIKAYLA CRAMER- IHS Environmental Science and Geology students had the opportunity to take part in a ship to shore video conference with IUP’s Dr. Jonathan Warnock on Tuesday, May 14, 2019. The micropaleontologist and a crew of 29 other scientists from around the world are sailing on IOPD’s Joides Resolution in Antarctica. They are conducting ocean drilling research to find out how icebergs impact the ocean sediment record.

Around 30 students participated in the video conference. They received a tour of the ship and were able to view the labs where samples from the ocean floor were being analyzed.

There was a storm going on at the time of the video conference, so they were not able to go out on the deck of the ship. The researchers were able to show their view out the window of the 25-foot swells. The broadcast was quite clear even with the storm and the ship being 9,000 miles away.

Freshmen Zachary Herrington stated, “I think the video was very nice to see what it was like to be out in the ocean and what their everyday life was like.”

The students had a lot of opportunity to ask questions. How long the researchers were to be on the ship? What the oldest sample was that they had found thus far? If the drilling had any impact on the environment? What they miss they most about home?

The researchers were able to break down the science into understandable terms for the students.

Junior Lily Carone stated, “My favorite part was when they talked about the micro fossils because it’s interesting that we can understand Earth’s history through such small things.”

Science teacher Ms. Gabriella Zuccolotto said, “I would absolutely consider doing a video conference with the Joides Resolution again. Every expedition that the ship goes on has an educator outreach officer on board whose job is to organize opportunities like this for students to talk with researchers. It is a really great way for students to learn more about ocean drilling research and careers available in the geosciences.”

Photo Caption: “IHS studens on a video call with Dr. Jonathan Warnock who was in Antarctica.” 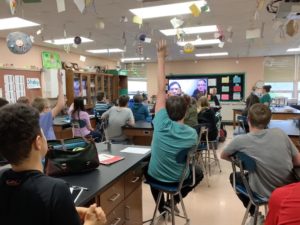