By EMMA NORMAN – Parris Island, South Carolina: the destination for three IHS seniors. Noah Clark, Luke Wachob, and Ewing Greenhill signed a contract with the United States Marine Corps. The boys are excited about their future and can’t wait for the opportunities ahead of them.

Joining the military is big decision, which isn’t easily made. The boys were excited to share their reasoning. When asked why he chose to enlist in the Marines, Noah Clark remarked,“It’s tough and the best of the best. There are a lot of opportunities and I have wanted to since I was a little kid.”

Leaving for the military can bring up a variety of emotions. Luke Wachob was eager to share some of his feelings about the decision: “I am excited about joining the military but I know that leaving my family and friends will be hard. It’s a little scary sometimes but it will be worth it in the end.”

Along with enlisting in the military comes signing an oath. Ewing Greenhill discussed his perception of the oath that he signed. He commented, “I signed an oath promising that I will protect this nation against all threats, foreign and domestic.”

Each contract can vary depending on how long each person plans on staying in and what MOS they choose for that period of time. Noah Clark and Luke Wachob both signed a 4×4 contract. Clark discussed his contract and what it contains, “I signed a 4×4 contract. That means 4 years active duty and then 4 years off duty reserves unless I decide to extend my contract and stay in longer, which I will probably do.”

Not only did Clark and Wachob sign up for the same artillery MOS, but they’ll also be in the same platoon together at boot camp. They leave for boot camp on June 10th.

Clark and Wachob were asked what advice they would give to other students who are considering enlisting in the military. Clark commented, “Do a lot of research on what MOS you would like to choose. Make sure you’re physically fit as well. It’s a big decision in your life.”

Wachob commented, “I think that other students thinking about enlisting should join the Marines, and take finding your MOS seriously because once you pick a job you can’t go back.” 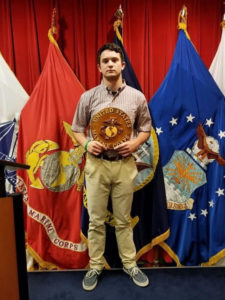