By JORIE MEIL- The IHS mascot has recently been under fire from a student lead campaign to change the nickname and mascot from the Indiana Indians to something deemed more politically correct. The appropriateness of the name was brought into question through social media and addressed at recent school board meetings.

Senior Frankie Baumer started an online petition to change the name of the Indiana Indians. Baumer describes the name as racist and insensitive to Native Americans. A total of 577 people have signed the petition, which exceeded the original goal of 500 supporters. The goal has now been moved up to 1,000 signatures.

“I think it [the mascot] should be changed because a group of marginalized people should not be used as a mascot, especially when our education system doesn’t teach us enough about their struggle and how they are still struggling,” stated a very passionate Baumer.  “I decided to start the petition and conversation because no one wants to talk about it. We are very comfortable being stagnant in that way.”

Baumer has received a great amount of backlash on social media and in the comments section of the petition. A number of counter petitions circulated around social media when the word spread about changing the mascot.

The controversy has split IHS students and community members based on their views of the mascot. Many people want to preserve the school’s nickname, with junior Heather Cable among these. “I personally believe the mascot should stay the way it is. It’s not offensive like some would say, but rather a historical figure that we are using to represent our school. It represents strength and power. It would create a big upset in school pride if it is changed,” stated Cable.

While many people want to keep the nickname and mascot, some have also sided with Baumer and believe it is time for a change, including junior Lily Boulard. “I have always thought the name to be racist and insensitive, and I’m really glad people are realizing it and taking a stand. Completely changing the name is a stretch for us because of all of the opposition, but I support the name change through and through. It’s literally a racial slur that’s not even historically accurate, and we are using it to represent a school full of mostly white students.”

The issue was addressed at recent school board meetings with many people speaking on behalf of both sides. Baumer and former IHS student Kalyn Menifee spoke to change the mascot. Many community members and students alike spoke up on behalf of the mascot, including Jordan Smith, Tammy Curry, Jeff DeBar, and Michael Scott.

Despite all of the controversy ‘The Indians’ remains the nickname and mascot of IHS.

Photo Caption: The Native American on the wall in the lower commons is seen by many as a symbol of Indiana Pride. 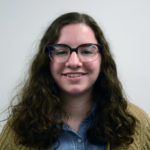