MIKAYLA CRAMER – Dawn breaks, birds chirp, squirrels scamper, a loud pop echoes through the air. Adrenalin spikes with the excitement of a kill. Many students at IHS bond over their love for hunting deer.

Many students feel the same as freshman Zackary Brody, “I think it’s important to hunt because we don’t want deer to become overpopulated.” By hunting, many Americans help control the population of deer and thus helps maintain a stable herd size. Hunting helps keep deer collisions with motorists from being a lot higher. For every one deer killed on the highway, hunters kill six to seven deer during hunting season. A stable deer population benefits the health of the deer in the herd.

Hunters helped form our National Park system and continue to support it. They also actively fund conservation programs, which play a major role in setting land aside for wildlife habitats. Hunting gives one knowledge about nature and helps people connect with other humans and animals in the outdoors. “You get to bond with whomever your hunting with and it’s peaceful,” said freshman Emily Moody.

People who hunt become determined, scouting and learning patterns and habits of deer; patient, because it takes patience to wait for deer to come to you; hardworking, hunters have to hike into the woods up and down hills sometimes dragging one’s harvest; and dependable, if hunting with a group or by oneself it is important for others to know where everybody is.

To become successful, hunters have to practice their shot. They need to know what they are shooting at and where to shoot. Hunter safety classes are offered multiple times a year.  It is a requirement to take a hunters’ safety course before acquiring a hunting license unless it is a mentored license (7-12 years of age).

Hunting is often a family tradition where children are raised with a love and respect for nature, along with having a greater appreciation for where one’s food comes from. “I think it’s important to hunt because people have to eat, it’s as simple as that,” stated sophomore Cole Dillon. 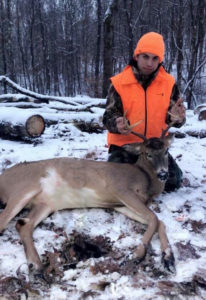