By MADDIE CRIBBS– Starting off the 1996-97 school year, former girls and boys basketball coach at Indiana Senior High, Doug Steve, sparked our community with an ounce of school spirit. Frustrated and filled with disbelief, Steve was disappointed that the student body of Indiana Senior High School were not coming out to support their fellow classmates. In that, Steve created the pride of IHS, the Rowdy Rooters.

Standing before our fellow athletes, stands the roaring Rowdy Rooters. Throughout the school year, students come out to cheer on their fellow classmates as they take the ice, field, or court. The Rowdy Rooters allows for the student body to gather together outside of school to bring smiles and cheers to sporting events.

“I’ve been part of the Rowdy Rooters since ninth grade. The Rowdy Rooters means a lot to me because it’s a time for students to come together and support our sports teams. It’s always a fun time and I’m glad there’s a decent amount of students that are involved in it,” stated senior Mea Cash.

The group helps to create a positive environment at sporting events, benefiting the

students involved and the athletes being cheered on. Whoever may be involved, the student body and coaches encourage everyone to come out and support their fellow classmates.

Senior Gunner Sharp expressed, “I think that as an athlete, and speaking for all athletes that play, the Rowdy Rooters provides a huge positive impact on our gameplay and how we perform. During all of our home games, the section provides an extra boost of energy and pushes us to work harder and earn the outcome they desire for us.”

Steve started the rooters as a club during the 1996-97 school year out of frustration and disappointment. Steve gathered together a small group of students that eventually grew to approximately 100 members by the 1997-98 school year, starting dress up nights and coming together to raise money for buses to travel to playoff games.

For the future, Sharp expressed, “I hope that in the future, the Rowdy Rooters continue to be as strong and loud as they are now. I think the goal is for the student section to continue to grow and have everyone in the school be a part of the section.” Sharp added, “For those who are hesitant about attending games, come to one and see what it’s like cheering on your fellow class members.” 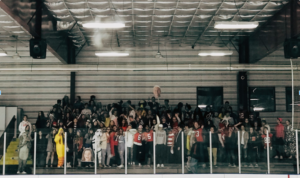