By SHAGUFTA HAQUE –  The current High Arrow staff has had the privilege of receiving high school issues from the 1943-44 academic year.

Ralph Wilson Rowland was a junior in 1943 who completed sophomore year in what was then called the Laboratory School of Indiana State Teachers College. When his father was appointed for a job in Washington, Rowland moved there with his family in the summer of 1944.

“That means [the newspapers] moved with me from Indiana to Washington DC to Virginia and then to Maryland.” he recalls, “At some point I passed them on to Sue.”

Sue Ellen Dietrich is the daughter who had been holding on to the high school newspapers for her father. She generously gave them to The High Arrow recently for us to have the copies on hand.

Rowland is not too sure why he saved the old newspapers for so long, all he remembers is that “they appeared interesting enough to preserve.”

The time period these newspapers are from is during World War II which meant that most of the content on the papers revolved around that.

Upon scanning through the 32 issues, the popular topics back then were ‘Boys Enter Service as Semester Ends’, ‘Bond Dollars are Peace Dollars’, ‘Boys in Service’, and ‘[Student] Receives Wings’ (where said student got “recognized because he passed the mental and physical examination to get enlisted in the Air Corps”).

The change in content proved the changes people of all ages had to go through then.

Rowland reflects, “Factories were converted from making domestic products to war items. No new automobiles, refrigerators, or radios, for example.

“Critical items in short supply were controlled by ration books, with their stamps required for purchases of gasoline, meat, sugar, etc.” Rowland continues.

Articles written for the High Arrow today are far different from those back then. The staff now writes about new Airpods or iPhones, political parties, the latest music or tv shows, and sports teams dealing with the pandemic.

The popular high school newspaper was established in 1932 and is running successfully to this date. Let’s hope the tradition gets carried on further! 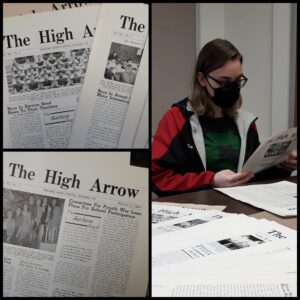 Photo caption: “Senior staff member, Kaylee Becker-George, looks through the old newspaper issues to get information about her latest article.”