By EMMA NORMAN – The Homecoming football game is a loved tradition by all IHS students, teachers, and alumni. The Indiana community comes out to, not only support the football team, but also to support all of IHS with the announcement of the yearly Homecoming Queen.

The Rowdy Rooters get the students hyped up for the game and ensure that the whole student body is on the edge of their seats during halftime. Halftime starts with the band performing their show, and ends with the announcement of Queen.

The whole school community roared with excitement. Parents cheered, the band was overjoyed, and the student section screamed with joy as they released colored chalk-paint into the air.

2019 Homecoming King Antonio Caporossi, was ecstatic about all of the events stating, “I thought the whole weekend was amazing, probably one of the best of my life. From being crowned, to the football game, to the dance, it was all an amazing experience. I couldn’t be happier, and I am so thankful for everything that happened that weekend. I will remember it always.”

Nick Hilliard, a senior on the football team, was grateful for the opportunity to take part in the Homecoming tradition remarking, “The game was a different type of electricity, and it was just an honor to be out on the field. The atmosphere was incredible. Seeing alumni come back and pack the stadium was amazing. Indiana is an amazing town and we really come together during times like these.”

Justin Raible, who is also a senior on the team, won the Scott Zellem award. This was announced at the end of the game. He was grateful for the award and thankful for his coaches and team. Raible commented, “I am humbled and honored to receive this award, but football isn’t a one-man sport so our whole defense earned the award.” 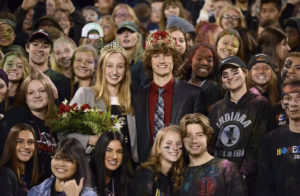 Photo Caption: “Homecoming Queen Amelia Kuzneski, and King Antonio Caporossi, are surrounded by their friend and classmates during the Homecoming football game.” 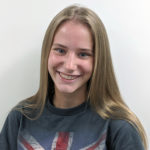