Once upon a time, a cast of actors will set out on a perilous journey to tell all of the 209 Brothers Grimm Fairytales in one night. Will they be able to accomplish this? You can find out in person as The Brothers Grimm Spectaculathon will be performed at the Indiana Area Senior High auditorium Friday, November 1 and Saturday, November 2 at 7:30 pm. The house opens at 7:00 and tickets can be purchased for $6.00.

The show tells all of the classic Grimm fairy tales in a two-act production. Well-known and beloved stories will be brought to a new and hilarious light. The audience will also be introduced to some lesser-known, but equally entertaining stories and characters.

The show is a comedy and will be sure to have the audience laughing the whole night. Senior cast member Alyssa McLaine expressed, “The play has some wonderful comedic elements. Each fairytale is joined together in a beautifully hilarious way. It’s such a fun show for all involved!”

“The play is pretty groovy. Every scene is wonderfully hilarious and every person who witnesses it will be bent over with laughter. I 100% recommend seeing the show,” agreed sophomore cast member Aviana Struzzi.

The play, directed by Mrs. Leah Lyons, is comprised of an ensemble-based cast lead by two narrators played by junior Bastian Webber and sophomore Avery Olenchick. The rest of the cast is made up of Alyssa McLaine, Brettney Marshall, Silas Schiera, Olivia Burkhart, Dexter Froud Sophie Runge, Carson Midkiff, Jorie Meil, Caitlin Wilson, Aviana Struzzi, and Kiara Smith. Each cast member, including the narrators, all play several characters in the interwoven world of the Brothers Grimm fairy tales.

The cast enjoys the show just as much as the audience will! “This current production is extremely fun to perform, and everyone radiates positivity, which really shows and makes the audience feel more connected to what’s happening on stage,” exclaimed sophomore cast member Caitlin Wilson.

The show is sure to be a night of fun, laughter, and surprises. Come out and see The Brothers Grimm Spectaculathon this Friday and Saturday at the Indiana Area Senior High! 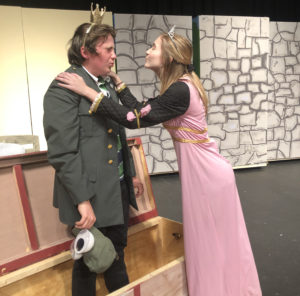 Photo caption: The frog prince (Carson Midkiff) begs for a kiss from the princess (Kiara Smith) in this weekend’s production of The Brothers Grimm Spectaculathon at the Indiana High auditorium. 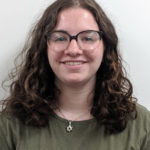