By HANNAH STEELE-  On August 22, IHS welcomed Mr. David Houseman as a long-term guidance counselor substitute for Mrs. Holly Marusa.  Marusa, who was on a sabbatical, returns for the second semester of the 2019-2020 school year.

Houseman grew up in Jacobs Creek, PA and currently resides in Allison Park, PA.  He attended Yough High School and graduated in 2009. Houseman earned his bachelor’s degree from Waynesburg University in 2013 and his master’s degree from Geneva College.  Prior to working at IHS, Houseman worked at a group home called Adelphoi Village.

“My favorite memory of IHS was watching the talent show, but specifically watching Avery Redd get flamed by Dr. Layden,” Houseman teased.

“Mr. Houseman was very helpful to me during his time here,” expressed junior Justin Reese. “As a junior, starting to look at colleges is very stressful, and Mr. Houseman took some of that stress away.”

Senior Andrew Rubenstein stated, “He [Houseman] was very helpful when it came to switching my schedule around and being available for students.  He was well mannered, kind, and a man of his word. If he said he was going to do it, he made sure that it got done.”

“Mr. Houseman was very helpful to me during his time here,” said senior Braedon Rearick.

In regard to advice for students, he shared this quote from Thomas Edison:  “Our greatest weakness lies in giving up. The most certain way to succeed is always to try just one more time.”

After the first semester is over, Houseman will be working as a long-term substitute guidance counselor at Ingomar Elementary School located in North Allegheny. 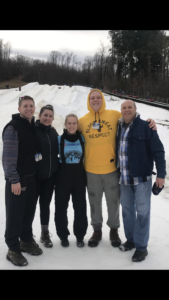