By ADRIANA GUTH-BOROWSKI – As autumn sets in, the students at IHS look forward to the fall play.  Clue, under the direction of Mrs. Leah Lyons, is to be performed on the IHS stage on November 2 and 3 at 7:30.

Clue follows a dinner party turned wrong. Much like the board game, the characters try to figure out who the murderer is. Filled with plot twists, it is sure to keep the audience on their toes.

“I think the audience will think it is hilarious. There is a lot of foreshadowing that people will realize when they get to the end of the show. The ending will be very shocking,” stated junior Kiara Smith, who plays Miss Scarlet.

Unlike normal fall plays, Clue includes two student pianists, juniors Nathan Birch and Lily Carone. Not only is there live accompaniment, but there is also a large number of sound cues. The average play has five cues, however, Clue has over 40.

Because the play is modeled after the board game, the sets change often, moving from one room to another. Typically, fall plays use a box set and stay in a similar place throughout the show.

“It is a lot more difficult than last years fall play because we had no set changes. There are a lot of things that go into it, and you have to make sure that everyone is safe,” stated junior Reese McFarlane, who is the stage manager. “It’s a lot harder than a normal play, but the set changes add a lot to the show and it makes it sort of come alive.”

Clue has a much larger cast than the average show with 16 student actors. “Usually, a cast is only seven to twelve actors, so this is a much bigger undertaking,” stated Mrs. Lyons, the director.

This unique play is sure to be a unique experience. The live music is unlike most fall plays, and the mystery is sure to keep the audience guessing. Come and support the IHS Drama Department and watch Clue.

Photo Caption:¨The cast of Clue rehearses before their performance.¨ 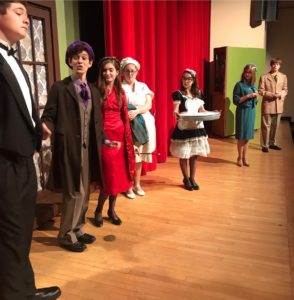