By LOUGHLIN PAGNUCCI – Halloween was a great film. It had some downsides keeping it from achieving a full five-star rating, but it had many upsides that cemented it as one of the best horror films coming out this year.

Halloween is about a deranged serial killer named Michael Myers (Nick Castle). He is being kept at a mental institute where two reporters come to talk to him. The two reporters then go and talk to Laurie Strode (Jamie Lee Curtis), who Michael had tried to kill many years ago on Halloween night. These are events that happened in the first Halloween movie.

At this point in the movie,  it is shown that Laurie is set up for Michael´s return to finally kill her. Laurie´s daughter, son in law, and granddaughter are also introduced. It is shown that Laurie´s daughter, Karen, unlike her mother, does not worry every night about how Michael might return. Allison, Laurie´s granddaughter, cares more about how Michael might return. She listens to her grandmother and is more trusting of what her grandmother has to say than what her mother thinks. When the introduction to Laurie´s family is completed, Michael is shown being transferred to a different mental institute. The bus mysteriously crashes, and he escapes.

Halloween was a very good movie. There were many good things about this movie, and the main character, Michael Myers, was one of them. The scenes with Michael were by far the best scenes. The uncomfortable, creepy, and unsettling emotions that he can evoke are what set this movie apart from the other horror movies. Halloween is more of a high-class horror movie. Jumping out of seats or waking up screaming is not something that may happen as a result of watching this movie, but it is scary, in a more mental sense.

Another amazing thing about Halloween is the score. The score is beyond great and deserves its place among one of the greatest movie scores of all time. The main theme was written by John Carpenter.

While Halloween had many great things about it, there were also some downsides. One of the biggest downsides was the amount of useless filler. This movie could have been a lot better if about half of the plotline was cut. Many of the events that happened had little to no effect on the main story. Many of the characters were not needed, also. Luckily, these moments are not all boring, just useless.

Overall, Halloween is a very good movie and is worth a watch. It is filled with good moments and only has a few bad parts. 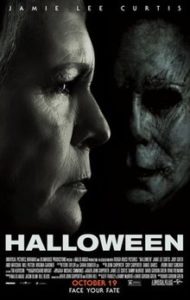