By MIKAYLA CRAMER – It’s that time of year again when the leaves start to change color and the temperature gets cooler. That means it’s time for pumpkins, pumpkin spice, apple anything, and green bean casserole.  There are so many favorite foods, drinks, and recipes that seem to only show up during the Fall season.

“Pumpkin spice, it makes me think Fall is here. Pumpkins make me think of Jack-O-Lanterns and that makes my think of fall,” stated Freshman Zora Watson.

One of the first references found in the U.S. about pumpkin spice flavoring was published in the “American Cookery” book written by Amelia Simmons in 1796. This flavor recipe was pumpkin with molasses, allspice, and ginger.

Most pumpkin spice products don’t even contain pumpkin. The most common flavoring used comes from cinnamon, allspice, cloves, ginger, nutmeg, and vanilla. There are so many different recipes for pumpkin spice: pumpkin pies, pumpkin gobs, pumpkin pancakes, and roasted pumpkin seeds. The possibilities are endless when it comes to pumpkins.

Sophomore Andre Rubinstein prefers pumpkin pie, “I like the texture and taste overall.”  Some people like to add a dollop of whipped cream topping to cover the top of their pie. The world’s largest pumpkin pie was made of 80 pounds of pumpkin, 36 pounds of sugar, 144 eggs and weighed over 350 pounds!  National Pumpkin Pie Day happens twice a year, once on October 12 and again on December 25.

Baked apples, apple dumplings, cinnamon apple bread, apple crisp, and apple pies are other Fall comfort foods. Junior Isabella Sharbaugh says, “My grandma makes this apple pie with cinnamon rolls on top and it’s really good. My cousins and I normally help her out and bond when making it together.”

Another fall favorite is green bean casserole. “It tastes so good,” said junior Brady Kodman.  This casserole isn’t just green beans, there is cream of mushroom soup, soy sauce, milk, pepper, and crunchy french fried onions. Green beans have an American heritage; they are native to Peru in Central America and migrating Indians introduced them to North and Central America before European settlers arrived.

No matter what fall flavor is preferred, there’s something out there for everyone. Share your favorite fall recipes with friends and make memories while making tasty food!

The following are links to recipes for the Fall recipes mentioned in the article:

Photo Caption: “IHS students line up to get a taste of fall flavors.” 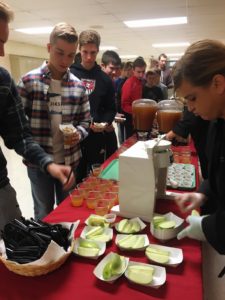