By MIKAYLA CRAMER- Music has always been a way for people to express themselves,  whether it is through instruments, singing, listening, or dancing. There are so many different genres and each person has their favorite. From classical to jazz, pop, rap, and country, all of these styles seem to be included in country music through a wide variety of artists.

Thomas Rhett is one of country music’s most popular male artists. Singing is in his genes because his father is country music star Rhett Akins. One of Thomas Rhett’s most popular songs at the moment is ‘Life Changes’, which tells the listener the story of his life, and allows his fans to relate to how things don’t always go as planned.

‘Die a Happy Man’ is freshman Kristianna Shear’s favorite song by Thomas Rhett. “I just love how it’s so sweet, and it makes my heart melt when I hear it.”

Maren Morris is another popular country artist. She has collaborated with Thomas Rhett on a song called ‘Craving You’. She had also auditioned for American Idol and The Voice, and was rejected by both competitions. Even with her failure on the shows, she was still able to make it big in the country music scene.

“I’d heard her music, but I really started listening to her when her song, ‘The Middle’, came out; same with all my friends. I would really recommend her songs to anyone that likes country music,” stated freshman Kamryn Fulmer.

Danielle Bradbery is a newer artist. She is the winner of season four of The Voice, and was on Blake Shelton’s team. She had also collaborated with Thomas Rhett in ‘Goodbye Summer’.

Each country song is a story that comes from the heart. People relate to the stories because they’re honest.  Many country artists are incredibly talented and can play two or more instruments as well as write their own songs. They use their own experiences, and this adds an amazing touch to it. 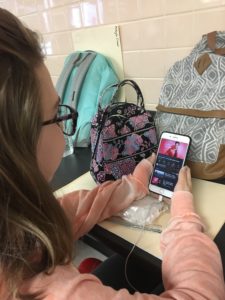