“Dynamite” is a high-energy song, with a music video taking on a more retro theme. It has been described by many fans as a feel-good song that just about anyone can enjoy. The song has nine remixes, ranging from more upbeat to more relaxing.

It was a surprise to their community of fans, commonly referred to as ARMY, that they were planning to release a single in English. While having been featured in other artist’s English songs, BTS themselves had never released one. Their dedicated fanbase prepared for the song like any other comeback with great excitement and enthusiasm.

Senior Andre Rubinstein, a fan of the group said, “I thought it was a great idea because it shows how they are expanding and want to grow into different languages and cultures. I’m excited to see what they continue to do.”

Other BTS fans expected an English single, but not this late into their career. Junior Ben Steffish said, “I think that it’s cool that they did an entire English song, although I wasn’t expecting it to come this late. BTS blew up after DNA in 2017, so it’s surprising that [their first English song] came in 2020.”

When “Dynamite” dropped, the music video got 101.1 million views in the first 24 hours. It debuted at #1 on the Billboard Hot 100 chart: a feat only having been achieved by 42 artists before them. They stayed within first and second place on the Hot 100 for the first few weeks after the release.

This wasn’t the first time the band had broken onto the Hot 100 chart. They have a long history of songs on the chart, with their song ON, the title track from their album Map of the Soul: 7, debuting on the chart at number 4, the band was expected to make it to the top at some point.

A lot of fans worry that the music industry is “rewarding” BTS for releasing an English song, as the western industry has been pushing for them to do so for a while. However, this could also be a signal that America is starting to open up to the concept of foreign music. Senior Rebecca Fries says, “I think people tend to be closed-minded about other cultures. BTS’s music is really no different from American pop except for the fact that it’s in another language and I think that’s one of the reasons people don’t accept them.”

BTS debuted in 2013. They have several full length albums and are a fixture in not only South Korea’s music scene, but also just about everywhere one can look in the country. The seven members have been given awards for their service to the country through their music and dance. 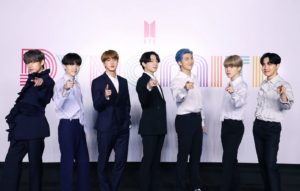