By SHAGUFTA HAQUE – Coached by Mr. Phil Palko and Mr. Nick Buckshaw, the boys’ tennis team has been engaging in regular practices to prepare for upcoming matches.

March 8 marked the beginning of all the spring sports seasons, including boys’ tennis. The seniors on the team are Ethan Black, Tim Hauge, Josh Lindsay, Ethan Shearer, and Danny Williams.

After a few scrimmages with Franklin Regional, Altoona, and Penn Trafford, and games against Valley and Hampton, the team is beginning to learn what they can expect of the season.

A definite team lineup is yet to be decided upon due to the challenges brought forth by the pandemic, as well as the mixed levels of each player. A month into the season, the starting lineup, as Palko affirms, “has been changing significantly.”

“This year has been very interesting for sports overall,” claims Ray, “We’ve had to adjust to keeping on the masks while not playing, having our temperature taken every day, and overall adapt to our new circumstances, including social distancing.”

Despite the uncertainties, the team has managed to welcome a few newcomers. Together with the previous players, they are expected to learn and enjoy the sport.

Shearer advises, “I’d say that newcomers should put in the work during and out of the season in order to keep getting better every year.”

The boys’ tennis season last year was cut short by the outbreak of COVID-19. The team along with its supporters are hopeful to have a full and triumphant season.

“I think we’ve already come a long way from the beginning of the season,” Ray hopes, “and whether we make it to the WPIALS or not, I think we will still be competitive in our section matches.”

During these trying times, it is crucial to recognize every bit of effort the players and the coaches are putting in to make the most of this year. We can only hope that the 2020-2021 tennis team, for the sake of its seniors, has a wonderful time.

Lindsay reflects, “I’ll miss just being able to play with my teammates and seeing them everyday as I cheer them on during a match.”

As most seniors share his sentiment, let’s wish them a successful year! 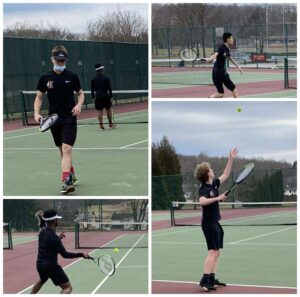