By ADRIANA GUTH-BOROWSKI – On October 30, 2018, the bands at IHS joined together for a combined concert in the new gym. There were performances by the Wind Ensemble, Symphonic Band, Jazz I, Jazz II, and the IHS Marching Band all under the direction of Jason Olear.

The evening kicked off with the National Anthem, which was sung by junior Amelia Kuzneski. After the Star Spangled Banner, Jazz II began the concert with See If I Don’t by SFC Paul White and A Night in Tunisia an arrangement by Michael Sweeney.

Junior trombone player Will Ferguson stated, “The juxtaposition of the two starkly contrasting styles of musical pieces showed the audience the wide capabilities of our symphonic band. Shenandoah opened with soft long tones and well-blended chorales. Foundry closed with an array of percussive and loud rhythms that filled the gym.”

Wind Ensemble concluded the concert band portion of the evening with October and Ghost Train, both composed by Eric Whitacre.

Junior percussionist Maggie Conjelko said, “I liked it because it was different than our normal concerts. We got to play different genres, and the audience got to see a little bit of everything.”

The IHS Marching Band had their last performance of their show entitled Amped to conclude the concert. The marching band played renditions of Piano Man, We Didn’t Start the Fire, Reeling in the Years, Bohemian Rhapsody, Billy Jean, and Living on a Prayer.

“It felt sad to perform for the last time.  We sounded really good, and it felt good to know that everyone put so much into it that the outcome was really cool,” stated junior flutist Hannah Lupinetti. “I’m excited to see what the marching band does next year.”

The different types of music performed showed the audience the wide capabilities of the IHS music department. With the direction of Mr. Jason Olear, the bands were able to fill the gym with beautiful music to show off the talent of the student musicians. 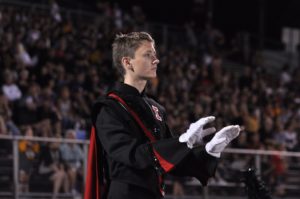