By ADRIANA GUTH-BOROWSKI – On Saturday, October 19, marching bands from all around Pennsylvania gathered at IHS for a night filled with music and camaraderie.

“I felt happy after the performance,” commented freshman Anna Failor. “The performance went way better than last year. Last year we were all stuck inside because it was pouring out, so being outside went way more smoothly.”

Following the performances was the annual drill down. The competition included students from each school going head-to-head in a basic block. Along with the band members, directors from schools who raised the most money also competed.

Although the directors were the last ones standing, the final student in the competition was Cormac Pagnucci, a senior trumpet player at IHS. Pagnucci was awarded the drill-down trophy and plaque.

The IUP marching band performed its 2019 show following the drill down. In addition, the band did special performances for the band section which included “Hopeless Wanderer” by Mumford and Sons and  “It’s the End of the World As We Know It (And I Feel Fine)” by REM.

“Watching the IUP marching band was extremely inspiring.  As one of those high school band kids in the stands, I can personally say that their show really got myself and everyone else super-excited,” said junior flutist Alexis Single.

“It was also extremely meaningful to us when IUP turned their show around to face us.  It really got people’s spirits up, and made it even better to be surrounded by others who love band as much as I do,” expressed Single.

Drum majors from each band gathered on the field to receive a plaque for participating to conclude the evening.

“I felt like we were due for our best run, and we hadn’t had it yet. You could just tell warming up that it was just electric. Everyone was excited and ready to go,” stated IHS band director, Mr. Jason Olear. “When I was watching it, it was kind of like watching it in slow motion. I could see the kids and what they have all gone through this year. From my viewpoint, I couldn’t have been prouder.” 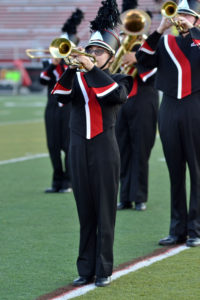 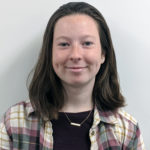