By HANNAH STEELE- For being a small town, Indiana is fortunate enough to have its own regional airport, which gives local people an opportunity to learn about airplanes and aviation.

Now, students are able to have this opportunity through the IHS Aviation Club. Officially started in January of this year by Jimmy Stewart Airport volunteer Nathanael Arthurs, the club has gained popularity among students interested in all things aviation.

Among the students enrolled in the club lies a certified 17-year old student pilot.  Adrian Balister is a private pilot through the Jimmy Stewart airport, and is the youngest on the field.  “I am very active in volunteering with the airport and the community,” stated Balister. “The goal for the club is to make aviation interesting and exciting for the kids in Indiana.  Aviation is one of the most underrepresented career paths, and we are trying to find a solution to this problem by informing students of aviation as a viable career option.”

The club participates in numerous activities that allow students to gain real-world knowledge about airmanship.  These projects range from building model planes to lessons that teach students about aerodynamic theory and how planes are controlled.

Some students have expanded their career interests due to the club.  “I like the club because it has inspired me to pursue aviation as a job,” stated junior Nick Shaffer.  “I am planning on attending the Pittsburgh Institute of Aeronautics to learn about aviation maintenance and electronics.”

“My plan for this club is to make aviation something that young people can get excited about,” expressed Arthurs.  “Aviation provides young people with amazing career opportunities. You don’t have to be a pilot to enjoy a good career in aviation. Even if we only succeed to get a handful of students involved in the industry, I will count that as a success.”

If interested in attending an Aviation Club meeting, stop down to Mr. Puskar’s room on Thursdays during 10th period. 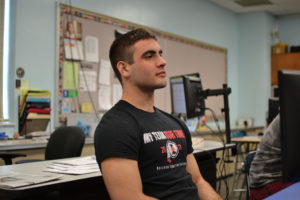