Each year, Americans honor veterans on November 11 in remembrance of the ending of World War I.  In regard to Veteran’s Day, on November 9, IHS hosted an assembly to show appreciation for those who have served.

The assembly commenced with the singing of the National Anthem by seniors Nick Scalican and Kaitlyn Stossel.  Following the performance, the A cappella choir, under the direction of Scott Salser, circled the auditorium and began to sing The Epitaph by Joseph M. Martin.  The performance was accompanied by junior Lily Carone playing the piano. The beautiful renditions left most of the auditorium speechless.

“I have done this piece two times prior, and each time I work with students on this piece, the students always react favorably to it,” stated Salser.  “It is an emotional piece that evokes an appropriate response for such an event as the Veterans Day assembly. We were glad to be able to perform this beautiful piece at both the senior and junior high assemblies in honor of our veterans.”

“I felt honored to pay tribute to local veterans,” expressed Kiara Smith, a member of the A cappella choir.  “There was definitely a sense around the room about how serious the song was, and I think it made an impact on the audience.”

Principal McElheny spoke about the importance of Veteran’s day and the duties of citizens to thank a veteran for the freedoms in America.  He then welcomed seniors Maddie Todd, Raleigh Smith, and Keagan Pilch, who read historical poems concerning World War I.

Senior Maddie Todd stated, “I was very happy that I was able to partake in the assembly and respect local veterans in the community.”  Todd read “Anthem for Doomed Youth” by Wilfred Owen, a poem that conveys the horrors of war.

Senior Philip Colen then addressed the audience about D-Day, which is when the Allied Powers invaded northern France from the beaches of Normandy during World War II.  After this, Colen introduced a video about the importance of the Navajo code talkers regarding the Allied victory in World War II.

The assembly concluded with senior Evan Ray introducing a tribute video about local veterans related to the students and staff of IHS, and a brief statistical history of each major war.

Junior Eric Atherton was aware of the importance of the assembly stating, “It was very pleasing to see how many people in our town have served our country, and it is important to honor them, along with all veterans.”

Always remember to thank a veteran on November 11 for the freedoms and liberties in America that should never be taken for granted. 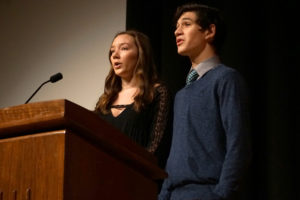