By ETHAN BLACK – Senior Allie Rutledge knows many things: how to lead people, break records, and especially how to throw a bowl. Over her past four years at IHS, Rutledge has been learning and illustrating a high school career, decorating herself as Key Club President, a record breaker, and running a popular Instagram business. The High Arrow got the chance to sit down with Rutledge to talk about her accomplishments.

To her own surprise, Rutledge said she, “unexpectedly broke the 1 Meter Diving record at IHS.” From becoming a rookie in eleventh grade to a now IHS record holder, Rutledge noted, “It has meant a lot to me to break this record my senior year, especially after this year we have had. Needless to say, this diving season has been a blast and I am thankful for my teammates and coaches who have encouraged me along the way.”

Adding to her own accomplishments, Rutledge began her own pottery business. Under the username: @artbyrutledge, her Instagram account has been garnering attention around the school, where Rutledge posts her custom creations for fellow classmates aa well as creations she made while taking pottery classes.

“The feedback and support I have received from my family and friends,” commented Rutledge. “I am very grateful for Mrs. Porter’s support and help throughout the year.”

One of Rutledge’s most significant accomplishments is holding the position of Key Club president. “After being heavily involved in the Executive Board last year,” stated Rutledge, “and I decided that I wanted to continue to be a leader in the club and run for president.”

Key Club had a tough year this year, but Rutledge didn’t let that disrupt Key Club’s normal initiative. “Leading a group of my peers has been a very positive experience,” noted Rutledge, “and I have learned so much about how to manage and work with others. I will always be so glad I took this opportunity, as it will help me in my future endeavors.”

Rutledge plans on attending Chatham University in Pittsburgh to study neuroscience and play for the university’s women’s soccer team. Good luck on your endeavors, Allie, and congrats on an amazing IHS career! 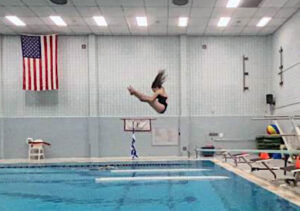 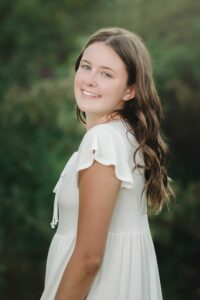 Photo Caption: “Allie Rutledge plunges into the pool for a perfect score.”