By KAYLEE BECKER-GEORGE – September of 1943 saw IHS’s students returning for another year of school overshadowed by World War II. This period was interestingly documented in several editions of the High Arrow from that time period.

Articles about WWII preoccupy the front page of almost every edition from that time; and that’s saying something, considering that the paper was being published weekly. The publications tell a story of a school trying hard to retain its normalcy while going through a hard time.

There is much talk of war, and of the boys in the school who had gone to serve. Some articles included details that the men in service had sent home to their teachers. Some talk about the home efforts to raise money and support their friends overseas. Others pay tribute to fallen IHS alumni overseas.

It’s hard to imagine how students were able to find a sense of normalcy in all of this. “I don’t think I would be able to handle a full on war,” senior Debra Flint stated. “My personal plans for after school would be halted because I wouldn’t feel safe out of my home, let alone in a new city away from all my loved ones.”

Despite this, they did manage to continue on in a fashion as close to normal as they could get. On the same page, talking about classmates entering the service as soon as the first semester ends, there could be talk of the play going on, or the student with the best attendance records.

The yearbook was cancelled for the year, so the High Arrow featured the seniors in the paper.

Senior Caleigh Cessna also drew the connection between going to school during a war and going during a pandemic. “I think in the future,” she says, “the High Arrow and other school newspapers will be important in looking at the opinions of teenagers during the Coronavirus pandemic.”

One day the articles written during COVID will be read by students in the future and they’ll wonder how this generation managed it. 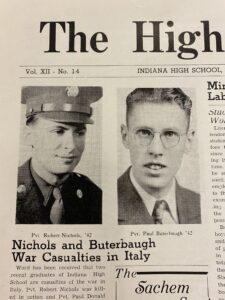 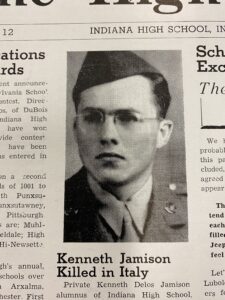