By JENNY TODD-  IHS Seniors gathered at the Andy Kuzneski field to participate in their senior class picnic and kickball tournament. It was one of their last gatherings before graduation.

Senior Class students flooded the field after school with lots of excitement to go around. Pictures were taken and Elementary schools were reunited with each other. Chaperons, Mr. Henninger, Mr. Cadile, Mrs. Walton, Mrs. Edmonds, Mr. Bertig and Mr. Woytowish were willing to  chaperon the picnic. This made for a fun time for the students to have their teachers at the picnic.

The senior class picnic is a tradition at IHS. Students had a week to pay $5 and sign up to play kickball on their Elementary schools team. Students look forward to this event each year and think of it as a way to get together.

The team colors were decided by the senior class representatives based on what the elementary schools used to wear for spirit days. Horace Mann was red, East Pike was black, Ben Franklin was green, and finally Eisenhower was blue.

Melina Hillard said “I think this is a tradition at IHS because it is a great way to bring the whole senior class together to have a fun time. I think it also incorporates who each person grew up with and reunites them,which is really cool.” The senior class picnic is a nostalgic experience for the students.

The night started with some good food. Walking tacos, cookies, snacks, and drinks filled the concession stand. IHS representatives who were on the class picnic committee were able to donate these items to make sure there was something for everyone.

Melina Hillard said “A lot went into planning this event from the Senior Class representatives in this committee. We had to all work together to make this picnic work and do different tasks to get the job done. I think everyone did so much to make it a fun night.” Students gathered and talked about elementary school memories and things that must have moved to the back of their memories until they were all reunited again.

After dinner, the elementary schools rallied up their teams for a photo, and the tournament began. Horace Mann vs. Eisenhower and Ben Franklin vs. East Pike. Both games had many curve balls and unexpected results.

Students were all respectful and shook hands after each game as they walked away with grace and respect for the other teams. Alex Holuta (Horace Mann team captain) stated that  “It’s super fun to be with everybody.” The great thing about the Senior Class Picnic is the way it brings everyone together. Class President and head of the picnic committee Nyle Bajwa expressed that “The tournament went great and the energy was very high. All teams did well and good sportsmanship was shown all around.”

Overall, the night was a huge success. Nyle Bajwa, Melina Hilliard, and Alex Holuta all said “a lot went into planning this event.” IHS is thankful to have students who want to participate in activities like these and help out with planning these events.

IHS Class Representatives would like to thank Mrs. Sexton, the Senior Class Representative Advisor for putting this event together, and all of the chaperons that volunteered their time on that chilly night. The IHS senior class can’t wait for more events like this. 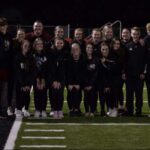