By ETHAN BLACK – After trudging through countless Apple Music and Spotify playlists, several cups of hot chocolate, and numerous car rides (which heavily influenced the selections for this list), I believe I have a culmination of the ten best mainstream Christmas songs of the late twentieth and present twenty-first century. My reasons will be justified after each listing and these songs are not ranked whatsoever. I have also included some honorable mentions, but if I did not get around to a song you’re currently streaming, I apologize.

● How Great Thou Art – Pentatonix and Jennifer Hudson

Although these songs couldn’t crack my top ten, I am sure others have them higher on their lists.

Now the moment everyone has been waiting for: the ten, soon to be timeless, current Christmas classics.

If you haven’t gotten around to a Pentatonix Christmas album, I highly recommend you doing so. Their renditions of “Mary Did You Know” or “I’ll Be Home For Christmas” are arguably their best, and adding Kelly Clarkson with “Grown-Up Christmas List” cracked them into my top ten for the nostalgic appeal, as we grew up with her winning American Idol.

There isn’t much detail needed for this song. But, if you can go a Christmas without hearing, “All I Want for Christmas is You,” that may be something to boast about (or a Cardinal sin in the eyes of Christmas lovers). Nyle Bajwa, a junior, seemingly cannot do so, stating he would make this his number one “because Mariah Carey’s vocals are on a whole other level.”

2020 has let me explore various new artists, one of my favorites being Kacey Musgraves. I really latched on to what she’s been bringing to the table, and having an entire Christmas album and Amazon Prime special sweetened the pot for her entry into my top ten. “Present Without a Bow” was not only great for its originality but also for the harmonies Kacey and Leon displayed on this track.

Hot off a November 20 release, the Jonas Brothers delivered the best new Christmas song in 2020. This song is so delightful and it feels like being at home when I was younger. I heavily urge you to listen to it with someone special this holiday season and enjoy it as much as I do.

Senior Adam Shephard had great difficulty choosing his favorite when I presented this list to him. When I asked him why he chose this song, Shephard stated, “‘Mistletoe’ by Justin Beiber is so nostalgic for me, it’d be hard for me to choose another song from the list. I never stop enjoying it at Christmas time.” I think most people can agree with Shephard, and I am certainly one of them.

I first heard this song in 2013 and it’s stuck with me since. Although it is heavily used in commercial advertisements, Clarkson’s belts are nevertheless a huge reason I come back to the track every Christmas and this made it easy for me to include it in this compilation.

George Michael and Andrew Ridgeley cheffed up arguably the best Christmas song of the last fifty years with “Last Christmas.” When I hear the opening synthesizers and drums, I automatically think of the 80s. The lyrics never bore me and sometimes make me hit replay. Do not be surprised if you catch me blasting this in the student parking lot before school.

When I was creating this list, I wanted to acknowledge other holidays celebrated at the same time as Christmas. Adam Sandler’s “The Chanukah Song” was first performed on Saturday Night Live in 1994, and is arguably the most popular, and possibly the only, Hanukkah song played on radio stations around the holidays. This song also proves you do not to be a Grammy award nominee to create a Christmas classic!

To get myself psyched for Christmas, I often play “Christmas in Hollis.” Cooking Christmas dinner or baking deserts while listening to Run DMC rhyme about what’s going to be on their tables definitely cements the Christmas spirit in me. Driving along Philly Street and looking at all of the lights on businesses is also a great way to listen to this song.

Rounding out the tenth and final spot of my favorite current Christmas songs is “Santa Tell Me” by Ariana Grande. While being last, it certainly wasn’t the least. Actually, It was recommended to me by several IHS students, one of them being senior Megan Brocious. When I asked Brocious why she heavily favored Grande’s song she claimed, “Ariana Grande is one of my favorite artists. I really like when artists take their own spins on Christmas. It is also just a great song to sing along to at Christmas time.” 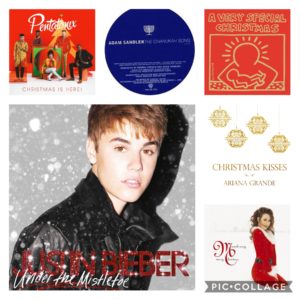 [Photo: A collage of some of IHS’s favorite holiday songs]