By ADELINE LOYAL – In the midst of COVID-19 regulations, many extracurriculars have been forced to adjust to rules and regulations. The drama club is no exception. Auditions for the school play took place on Thursday, October 1 over a Google meet.

The fall show, titled Paired Down, is a collection of short, unconnected scenes tied together under a single common theme: nobody gets closer than six feet. Some will be done in person, with students twelve feet apart on the stage, and others will be completely virtual and conducted over a Google meet.

Unlike in previous years, there will be no live audience for this year’s shows. Instead, They will be pre-recorded and streamed online. Tickets will be available to anyone interested.

The virtual auditions were a drastic change from prior shows. “It was odd and took some getting used to,” said junior Caitlin Wilson, “but we figured out a way to do it safely and didn’t really have any complications.”

The new audition and crew selection process has only added to the adjustment period for incoming freshmen. Kamryn Snyder, one of these 9th graders, is a crew member for Paired Down. “Since we’re doing a virtual show, it’s completely different,” Snyder said. “t’s a bit more difficult, but still very enjoyable.”

Even seniors are having an adjustment period. The new process of auditions was completely different from those of a pre-COVID world. While students in previous years entered the auditorium and auditioned in person, they now had an assigned time to enter a Google meet. According to senior Bastian Webber, “It was a pretty fair way to have people audition. The fact that it was only me, Mrs. Lyons, and a stage manager on the Google meet made it a lot easier.”

While the period of adjustment has been by no means easy for anyone, the drama club hopes to provide a sense of normalcy by continuing to perform. Despite the ever-changing circumstances, according to them, the show must go on. 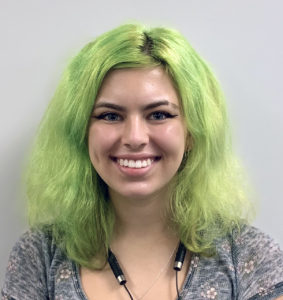 Adeline is a junior and first-year reporter for the High Arrow. She enjoys theater and is a drama club officer. She is excited to write articles and be a part of the staff.